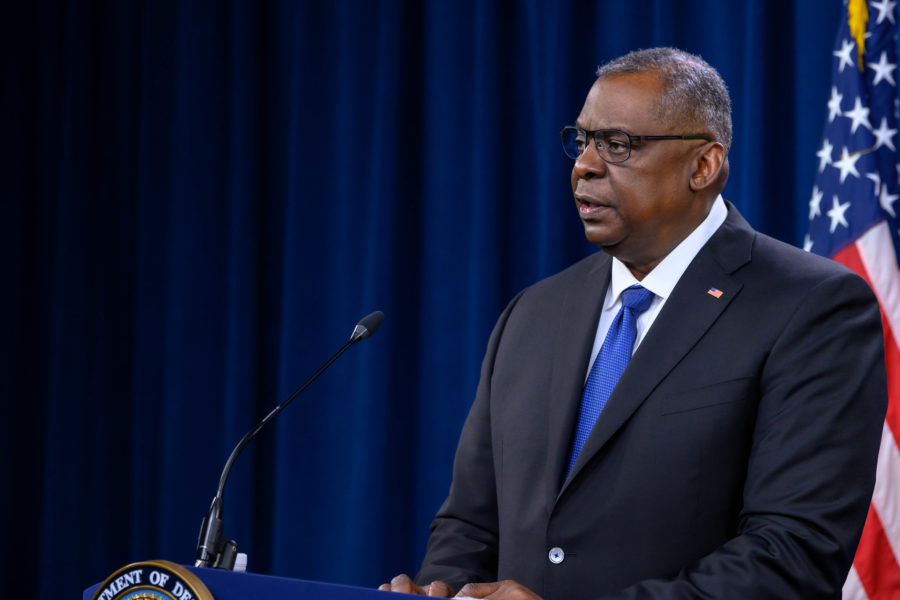 Defense Secretary Lloyd J. Austin III tested positive for COVID-19 Jan. 2 and is experiencing mild symptoms, he said in a statement, noting he last met with President Joe Biden Dec. 21 and his own staff on Dec. 30. Both meetings took place prior to exhibiting symptoms. The Secretary will conduct virtual meetings as necessary and quarantine at his home for five days.

“My symptoms are mild, and I am following my physician’s directions,” Austin said, noting he had requested the test after exhibiting symptoms.

“Stemming the spread of this virus, safeguarding our workforce, and ensuring my own speedy and safe recovery remain my priorities,” Austin added.

Pentagon spokesman John F. Kirby told Air Force Magazine in a written response that Austin was on leave, at home with his family, when he began to experience symptoms on Saturday, Jan. 1.

“He immediately called his physician, who promptly scheduled a test Sunday morning. His immediate family, his security detail, and a small number of immediate staff members have been exposed to him in the last week. They are undergoing testing and will take appropriate steps if positive,” Kirby said.

The spokesman declined to specify the variant of coronavirus that was detected.

Austin referenced a trip to Southeast Asia in early 2022 to drum up regional support deterring China during remarks Dec. 4 at the Reagan National Defense Forum, but the trip was postponed prior to his developing symptoms. Details of the countries Austin planned to visit in the region were never formally announced.

The Secretary will retain all authorities and has designated Deputy Secretary Kathleen H. Hicks to represent him in other matters.

Austin’s own COVID-19 infection comes amid heightened measures across the defense apparatus to contain the rapid spread of the highly-contagious omicron variant, which infects even those who have been vaccinated and received a booster. Austin received his COVID booster shot on Oct. 8.

During his Jan. 19, 2021 nomination hearing before the Senate Armed Services Committee, Austin promised to use DOD to help distribute vaccines across the country and to vaccinate troops in order to preserve readiness.

In the months since an August DOD vaccine mandate went into effect, each of the services were directed to set their own deadlines. Active-duty service members who refuse to vaccinate have been removed from the service. Deadlines for members of the Reserve and National Guard to vaccinate is June 30, 2022.

On Dec. 29, DOD awarded $136.7 million for a company to improve production capacity for point-of-care tests.

The award, made in conjunction with the Department of Health and Human Services, will allow MilliporeSigma of Sheboygan, Wisc., to produce enough nitrocellulose membrane to support more than 83.3 million tests.

The American Rescue Plan Act funded the effort, which was coordinated with the DOD Defense Assisted Acquisition Cell and the Air Force’s Acquisition COVID-19 Task Force.