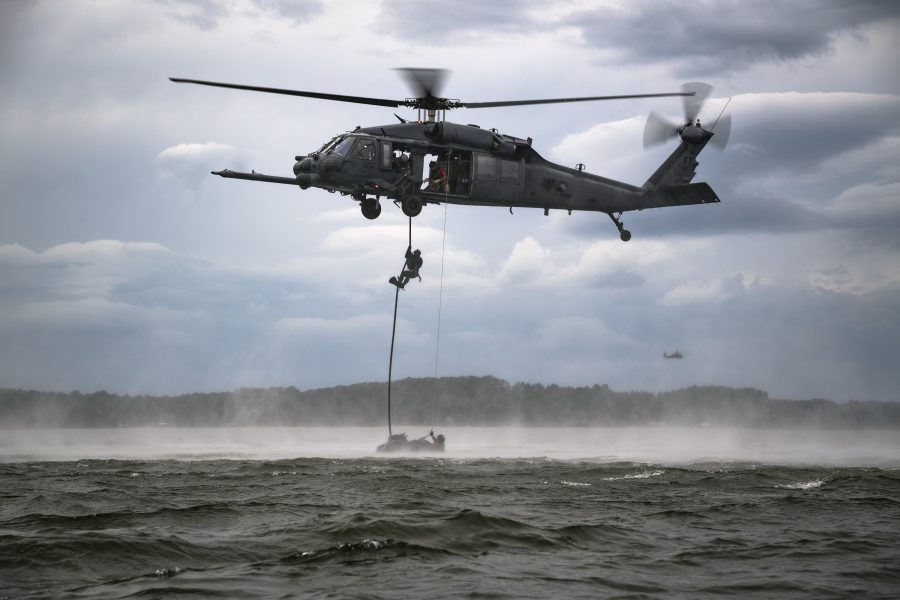 Kelly: Downed Airmen May Have to Get Themselves to Safe Areas

The combat search-and-rescue mission will be extremely challenging in a fight against a peer adversary, and the focus may have to shift to downed Airmen finding their own way to safety, Air Combat Command boss Gen. Mark D. Kelly said Aug. 3.

The future of CSAR is “a tough, tough equation,” Kelly said during a Life Cycle Industry Days seminar run by the Air Force Life Cycle Management Center. The mission may have to change given the long distances and enormous expanses of water in the Indo-Pacific theater and the “speed, the vulnerability, and the range of our current rescue platforms.”

Air Combat Command is “looking at it from the lens of … how much can the isolated personnel get themselves out or get themselves to a place where they can be recovered, as much as how the recovery force is going to get to them.”

He noted that if a pilot needed a stealthy F-35 to get to a well protected location, “it’s going to be tough to get in that same chunk of airspace with the [rescue] equipment we have.” The challenge is to come up with “avenues and means for the isolated personnel to help themselves, if at all possible, to get to a more opportune location” for recovery.

Many rescue operations have been spearheaded by an A-10 flying top cover for the recovery and managing the movement of CSAR assets into and out of the rescue area. The A-10 was “great” at this in Afghanistan and Iraq, and Kelly said many lives were saved because an A-10 “took charge overhead.”

But he also said the Air Force’s planned inventory of A-10s is “more than enough” to meet its close air support and other needs and that the seven squadrons the service will retain into the early 2030s is not the way to build the Air Force of the future. Lacking stealth, the A-10 can’t get into those areas where a fifth-generation jet such as the F-35 can go.

“The fact of the matter is, as we sit here today, I have exactly zero A-10s in the Middle East, for a couple of reasons. One, the distance is too far to go from our Middle East basing to places like Afghanistan, over the horizon. Two, the threat in and around Syria—the Russians’ air defense systems—[is] too great to operate in, so we essentially had to bring them home.”

Given the considerations of distance and threat, and applying them “to places like the Asia-Pacific, the distances just become greater and the threat becomes infinitely greater,” Kelly said, indicating the A-10’s ability to help with CSAR in that region will continue to diminish. While he respects the “phenomenal performance” of the A-10, there’s an “ever-decreasing of the niche areas where it can operate, day in and day out.”

The Air Force will put new wings and avionics on 218 A-10s, which Kelly noted is 34 more than the F-22s in inventory, but of them, he emphasized, “I have zero engaged.”

For Korea, where one A-10 squadron is available to defend the demilitarized zone, seven squadrons is not only “more than enough,” it’s “more than the South Korean peninsula can hold,” in terms of locations to base the jets.

Kelly said China is “our pacing threat. If we’re going to keep pace with what they’re doing, … you’re not going to do it by refurbishing a fleet of 40-year-old, single-mission, 210-knot airplanes. You’re just not, regardless of how much they’re loved and the great performance they’ve done.”