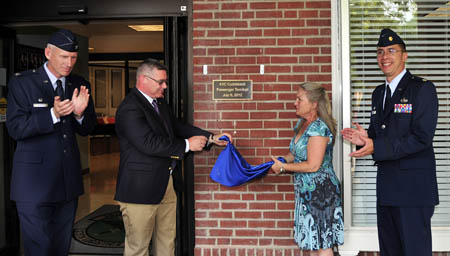 and members of the local community gathered at Scott AFB, Ill., to dedicate the base’s newly renovated air passenger terminal in honor of A1C Zachary Cuddeback. An Islamist-inspired Kosovar Albanian shot and killed Cuddeback, 21, of Stanardsville, Va., along with SrA. Nicholas Alden, 25, of Williamston, S.C., in an attack on airmen in March 2011 in Frankfurt, Germany. Cuddeback, a vehicle operator who was assigned to the 86th Airlift Wing at Ramstein AB, Germany, was born at Scott in July 1989, and is buried in nearby O’Fallon, Ill., northwest of the base. “Naming the terminal after our fallen comrade allows us to pay tribute to him,” said MSgt. Brent Severns, small air terminal section chief with Scott’s 375th Logistics Readiness Squadron. Severns is credited with coming up with the idea of naming the terminal after Cuddeback following its 18-month, $1.9 million renovation. The dedication ceremony was on July 6. (Scott report by A1C Jake Eckhardt)