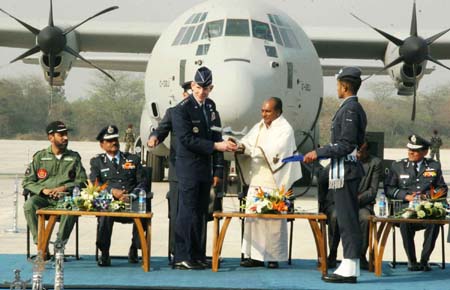 Chief of Staff Gen. Norton Schwartz was on hand as India inducted the first of six C-130Js into its mobility fleet. During the Feb. 5 ceremony, Schwartz presented Indian Defense Minister A.K. Antony a model of the Super Hercules and visited with airmen at Hindon Air Force Station near New Delhi where the aircraft will be housed, according to a USAF release. India is expected to receive all six aircraft—purchased as part of a $1.2 billion US foreign military sale—by the end of 2011. (See also Lockheed Delivers India’s First C-130J from the Daily Report archive)