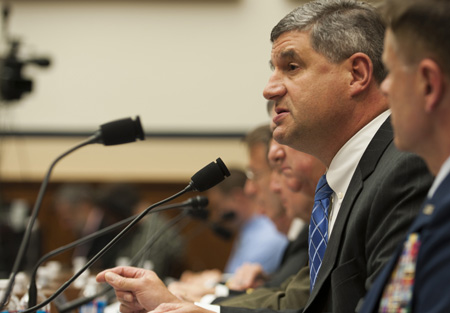 The Senate Armed Services Committee considered the nomination of William LaPlante to serve in the Air Force’s top civilian acquisition post on Thursday, along with two other Pentagon nominees. If confirmed, LaPlante will become USAF’s first full-time acquisition boss since Sue Payton left the position in 2009. In his testimony, LaPlante said he has been impressed with the dedication of Air Force acquisition professionals since arriving in government last year, but he understands the need for the service to improve cost and schedule performance. While some areas have improved, the service still needs to do better with up front systems engineering, risk management, technology maturity assessments, and “disciplined approaches” to requirements changes, according to his written testimony, especially with declining budgets. Budget uncertainty has made it “extremely difficult” for program managers to manage cost and schedule baselines, and that drives short term strategies that may be less efficient than longer term ones, such as multiyear contracts, he noted. LaPlante was nominated for the position last October, and has served as the service’s principal deputy assistant secretary for acquisition since May 2013.