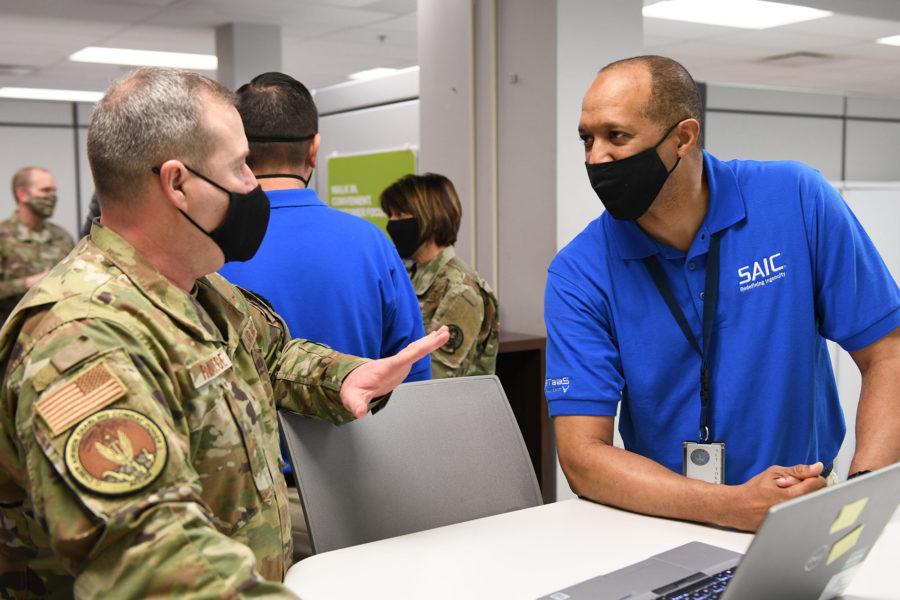 Imagine if every time you moved to a new home, you had to connect the electricity, plumbing, and internet all over again. All the wires, pipes, and switches connecting you to the world were your responsibility. That’s how the Air Force operates its information technology. For generations, it’s managed everything itself.

Now that’s changing. The Department of the Air Force is pursuing a future in which it buys all its IT as a service, from cloud computing to networking and from email to the help desk.

Enterprise IT as-a-Service (EITaaS) is a far-reaching vision intended to modernize IT services and keep them updated by putting the onus on the provider to offer best-of-breed technology solutions so Airmen and Guardians can focus on what counts most: Deterring war and fighting and winning, if necessary.

The Air Force is about a year into perhaps the biggest test yet of that concept: a three-year, risk-reduction program on nine bases involving help desk and on-site support and service. Ultimately, EITaaS could encompass everything from desktop equipment and network connectivity to software and network services ranging from email and video conferencing to accounting, personnel, and logistics systems. All of this falls under commercial IT construct of managed services which will lead to cost efficiencies and ensure that the AF and USSF have a 21st century network which paves the way to JADC2/ABMS in the future. EITaaS helps enable the DOD vision of true interoperability.

“The aim is to be invisible,” he says. “You don’t want anyone to notice you’re there because the services and tools you’re providing should just work.”

When Airmen show up at their “battle stations,” he said, “they should just sit down and do their job without thinking about the technology.”

Airmen and Guardians today grew up as “digital natives,” Rivera says. They can’t conceive of a world without smart phones and instant internet connectivity. They’re used to downloading an app themselves and having it work right away. They expect technology to work on demand. Having that modern, seamless experience also means attracting and retaining top talent for the Air Force and Space Force.

“So with EITaaS, the idea is to give them that same kind of experience, just like they’re used to with their phones,” Rivera says.

“Delivering that positive user experience for Airmen and Guardians on the ground, that is our Holy Grail,” Rivera says.

Put another way, it’s about giving users a high-end consumer experience. “If you think about Genius Bars with Apple, how do you build that next generation of service desk that is artificial intelligence-enabled, tier zero?” asked Bill Marion, then the Air Force’s deputy chief information officer, in a Federal News Radio interview in 2020. “That went live for about 70,000 Airmen with a ServiceNow platform … work[ing] trouble tickets with speed and agility.”

Moving to an Enterprise IT as-a-service construct for all IT services in the Air Force that is based on commercial best practices and performed by a commercial vendor allows Airmen and Guardians to move focus on defending our country.  Commercially operated IT support provides the AF with trained and knowledgeable IT professionals who can help remedy any problem thereby increasing Airmen and Guardian productivity.

For Rivera, it’s about treating Air Force customers as individuals, not trouble tickets. “This is a retail business, not a wholesale business,” he says. “Every interaction is measured. We’re constantly looking at data about how the customers feel about how we’re doing. You win it one customer at a time.”

SAIC is partnering with the USAF on the Risk Reduction Effort (RRE) for End User Services. Ranked by Gartner as the top provider in the U.S. for services in the government vertical in the categories of infrastructure implementation and managed services, and application managed services, SAIC is providing commercial services in an enterprise environment for nine bases:

In addition to 24/7 on-call support, SAIC has field services teams at each location. “We think of these guys as ‘contract Airmen,’ Rivera says. “They are on the front line, every day, and they are fulfilling the operational mission imperative—making sure everything just works.”

The company also has a liaison team embedded with the 16th Air Force to work on cybersecurity issues.

Rivera says it’s important his “contract Airmen” maintain a strong personal touch. “If someone answers one of our surveys and records a bad experience, we follow up with that customer,” he says. “Why was the experience unsatisfactory? How can we make it better the next time? We are very focused on those details.”

The feedback and personal touch are essential because the hardest part about moving to an approach like EITaaS is helping users through the challenges of change.

“The Air Force is nearly 75 years old, and for the longest time, the service provisioned its IT organically,” Rivera says. “IT was provided by Airmen within the chain of command.” Getting used to a different paradigm is difficult, but necessary.

“Commanders grew up with these young officers—I was one of them—managing the IT network and they only needed to pick up the phone to get those folks to jump up and run through walls for them,” Rivera says. To be confident in EITaaS, they have to imagine the same level of commitment. Even better, they need to be confident the system will work whenever, wherever they need.

“As the Air and Space Forces shift focus to mission assurance functions, improved enterprise IT services will allow Airmen and Guardians to maximize time spent on the mission and minimize delays due to inefficient IT,” stated Brig. Gen. Chad Raduege, Air Combat Command Director of Cyberspace & Information Dominance during the opening of the first USAF Tech Café.

“We meet regularly with different stakeholders in the Air Force, from the very senior level all the way down to the Airmen and Guardians in the field. We needed to make sure that we understood their concerns, and addressed them in a positive fashion to make sure that every single one of my customers understands the value that we bring to the mission,” Rivera said. “We reinforce that with every communication.”

The teamwork between the Air Force and SAIC builds brick by brick. “It’s an iterative process,” Rivera said. “It’s not one conversation. It’s every contact. We build trust in our services one customer at a time, one contact at a time.”