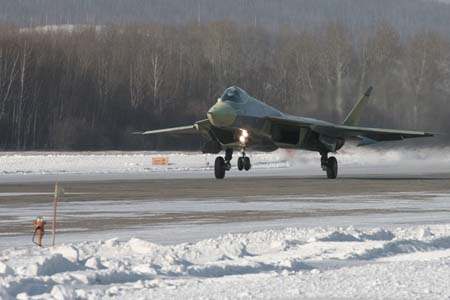 Russia’s PAK FA fighter prototype, billed as a strong competitor to the US F-22 and F-35 fifth-generation fighters, made its first flight Friday. The Sukhoi-built fighter flew for 47 minutes, raising and lowering its landing gear. According to video of the flight, the PAK FA has design similarities to the Lockheed Martin F-22 Raptor. Sukhoi has said the aircraft will undergo two years of test flights before entering full production. The company said the project has cost $8-10 billion, and that individual examples of the PAK FA, which will likely be called T-50 in operational service, will cost about $100 million each. The Russian Air Force expects to begin fielding it in the 2015-2017 timeframe. The aircraft is a joint venture of Sukhoi and Hindustan Aeronautics of India, which also plans to field the new fighter in a two-seat version. USAF officials have expressed concern that the PAK FA would rival the F-22 but be produced in F-35 numbers. (Sukhoi release; Associated Press report, via Los Angeles Times; London Times Online report; RiaNovosti news service report)