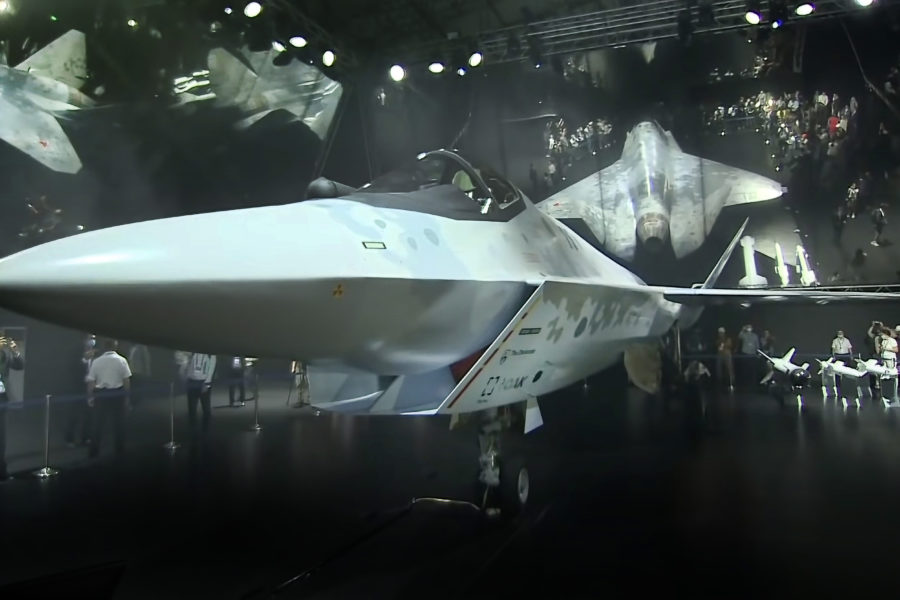 Russia officially unveiled its new Checkmate fighter at the MAKS airshow July 20, offering a series of ambitious performance claims about the jet, which it is clearly promoting as a low-cost, single-engined alternative to the F-35 in the world market. Company officials said an unmanned version may become available.

United Aircraft Corp.—parent company for all of Russia’s aircraft makers, including Sukhoi, Ilyushin, MiG, and Tupolev—says the Checkmate will fly in 2023, will be in series production in 2026, and will be offered for export at the bargain basement price of $25-$30 million per copy. That’s well below the price of the F-35, which is running at just under $80 million a copy for the conventional-takeoff F-35A model, after some 665 examples have been produced. A company press release said the Checkmate was developed “in record time.”

Yury Slyusar, general director of UAC, said the company’s task is to offer the Checkmate in large numbers “starting from 2026,” with smaller lots produced before that. The company did not say whether the article on display was a mockup or prototype. It will be capable of defeating “fifth-generation foreign aircraft” as well as be able to “withstand sixth-generation systems that may appear in coming decades,” Slyusar said.

Russian deputy prime minister Yury Borisov, at ceremonies unveiling the Checkmate, said there’s a market for 300 of the aircraft in Africa, India, and Vietnam. Company videos have suggested that Argentina and the United Arab Emirates are also potential customers.

Checkmate is not a natural Russian phrase; the term “shakh” is used in chess to put a player in “check,” and “mat” is declared after making the final, winning move. “Mat,” pronounced “maht,” is also used to refer to vulgar or obscene language. The Checkmate name appears to be a work of propaganda, designed for Western consumption.

The jet is claimed to have a short take-off and landing (STOL) capability—though no specifics were given—and a payload, including fuel, of 15,000 pounds. It is to have a combat radius of 930 miles, versus 770 miles for the F-35 on internal fuel. Sukhoi claims the jet will have a maximum turn loading of 8G, between the 9G of the Air Force F-35A and the 7.5G of the Marine Corps/Navy F-35B and C.

Although a variant of the Saturn AL-41F1 is the presumed engine, officials at MAKS have hinted at a thrust in the 32,000 pound class; just above what the Saturn can produce. The F-35’s F135 powerplant generates about 40,000 pounds of thrust.

The jet will have an active electronically scanned array (AESA) radar able to engage six targets at once, “even under conditions of strong electronic interference,” and the AESA will work cooperatively with the sensor and electronic warfare capabilities of the jet, UAC said.

Press statements about the jet say its pilot will be assisted by artificial intelligence capabilities and other “innovative solutions.” A two-seat model may also be available.

The cockpit features one large and several smaller color multifunction displays, unlike the F-35’s single-piece flat panel, along with a standard heads-up display.

Observers at MAKS said the jet does indeed have a ventral weapons bay, as well as two slender side bays for internal carriage of weapons. Besides the KH-59MK anti-ship missile shown in pre-unveiling images, the Checkmate display also includes long- and short-range air-to-air missiles and an assortment of air-to-ground ordnance including the GROM-E1 and GROM–E2 winged bombs, comparable to the StormBreaker Small Diameter Bomb II. It’s unclear from promotional material at the display whether a 30mm internal gun is part of the basic aircraft or will be “available” to customers. Only the F-35A version has an internal gun as standard gear.

Unexplained transparencies on the side of the aircraft suggest a capability similar to the F-35’s Distributed Aperture System. There was no direct reference to a helmet that could take advantage of such a system, like that on the F-35.

Company officials also said the Checkmate will be more field maintainable than other jets in its class with its capability. The F-35’s operating cost and maintainability have remained stubbornly high; so much so that the Government Accountability Office and the U.S. military services have considered cutting back on purchases due to affordability. The UAC claims at this point are purely speculative.

Images of the Checkmate circulated by various press organizations show the planform and main air intake are broadly similar to that of the Boeing X-32 Joint Strike Fighter contender in the competition won in 2001 by the Lockheed Martin F-35. It also echoes features of other also-ran U.S. fighter designs of the 1990s.

An Air Force spokesman did not have any comment about the Checkmate.