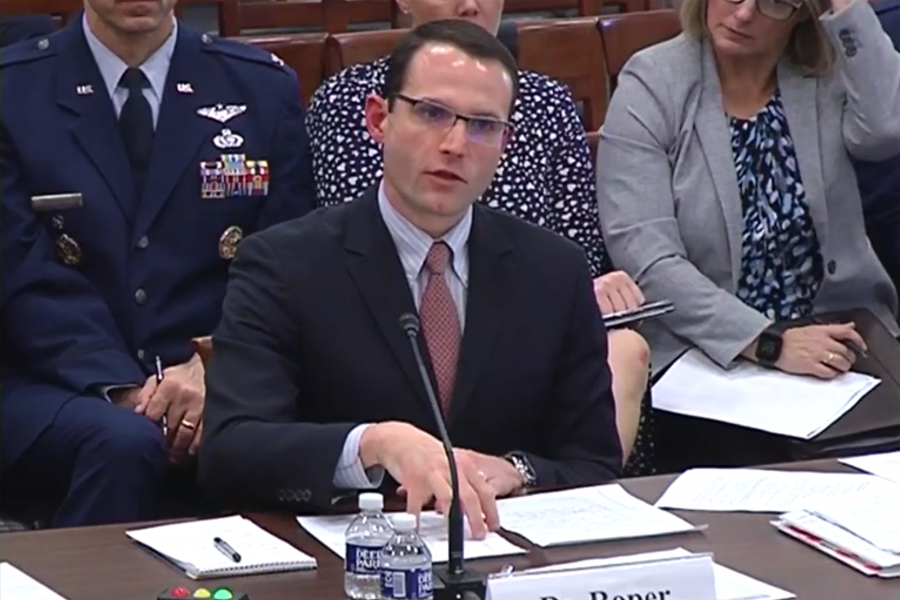 Air Force acquisition boss Will Roper is seeking more congressional help for the defense industrial base as companies find their new business rhythm in the coronavirus era.

“We’re transitioning into the new steady state. The number of new discoveries is going down and that’s good,” Roper told reporters April 16. “It’s allowing our workforce to get a more predictable posture, work ahead of issues we predict will happen.”

Aerospace contractors have been hit particularly hard because many companies handle projects for both the public and private sectors, and therefore are susceptible to losing revenue in both areas. Still, Roper struck an optimistic note that the Air Force’s procurement priorities and its contractors can make it through the crisis.

“We will have slips across the board. What I’m proud of is that nothing’s come off the rails,” Roper said. “Companies have had to shut down to do cleaning. They’re standing back up. That’s what we wanted to see.”

The Air Force so far has reacted to the pandemic by trying to award contracts to companies sooner, temporarily stopping its practice of withholding funding until certain program problems are resolved, and pushing money through prime contractors to their suppliers faster than usual. Roper expects companies will deliver products slower than usual because fewer people are working at once, and work slows down for routine cleaning.

Acquisition officials across the Defense Department have stressed that work must safely continue amid new health precautions, deeming the defense industrial base an essential sector of the economy because of national security concerns. The Pentagon is also trying to deter its small businesses from taking funds from other governments or overseas venture capital firms because of security issues.

Now, Roper is discussing a four-part wish list with Capitol Hill to assist in those efforts.

Congress has been engaged and understanding of military needs so far, Roper said. Lawmakers are considering what might go into another massive stimulus package to follow the $2 trillion Coronavirus Aid, Relief, and Economic Security Act, as well as other legislation to address funding issues resulting from earlier bills.

In a company-wide message, Boeing President and Chief Executive Officer Dave Calhoun praised a $25 billion agreement between the U.S. government and 10 airlines that “allows us to plan our production system for the medium- and long-term impact on air travel.”

“We are hopeful that governments around the world will follow the lead of the U.S. and support their aviation industry in a similar fashion,” Calhoun wrote. “In addition, the U.S. government can now turn its attention to the manufacturing base that supports the global air travel industry. Our industry will need the government’s support, which will be critical to ensuring access to credit markets and likely take the form of loans versus outright grants.”

He added that Boeing is looking for the best ways to maintain liquidity for itself and its suppliers “until our customers are buying airplanes again.” The company is returning its teams to work at some Boeing sites across the country, including reopening its KC-46 and P-8 production lines.

“We continue to believe strongly in the future of aviation and of Boeing as the industry leader and are willing to borrow against that future,” Calhoun said.

Eric Fanning, head of the Aerospace Industries Association, echoed the need to support the small businesses that support DOD and the commercial sector with a steady flow of cash.

“The tools and resources federal leaders already approved have been a powerful aid to these businesses and the nation’s economy. However, more help is needed,” he said in a release. “Increasing support and expanding access for small businesses is essential to not only navigating this crisis, but also fueling the recovery our country will need.”

“Building up a completely new supply chain takes time,” he said. “We’ve got to be able to put money from the interagency [toward a] contract. That is being worked presently.”

Roper hopes government agencies call on the Air Force for help more often in the coming weeks, saying the service has “a lot more bandwidth” to offer. The Air Force’s recent technical work with the Federal Emergency Management Agency could open new avenues for USAF suppliers to start designing and building some of the less specialized medical gear the nation needs.

AFVentures, one of the service’s small business and venture capitalist outreach groups, has also taken on the role of a front door for anyone looking to engage with the Defense Department on ideas to tackle the pandemic. The Air Force has received more than 1,000 submissions from commercial companies suggesting ideas to help combat the spread of the coronavirus, Roper said. But bringing those ideas to fruition will prove difficult without easy access to funding.

“I’m pushing off with money that I have, it’s just Air Force money, not whole-of-government response money,” he said.

Shoring up the commercial sector, not just traditional defense contractors, is high on Roper’s wish list as Capitol Hill mulls its next steps for issuing financial aid and regulatory shifts to help companies stay afloat. He speaks to Congress twice a week about what the Air Force needs, especially as it looks to help the emerging commercial space sector weather the pandemic.

“I know … down to the third or fourth decimal, the amount of funding I need for a request for equitable adjustments,” Roper said. “When acts of God or pandemics happen, [companies are] allowed expenses in contracts that we know will come. We’re asking industry to mitigate them and the response has been pretty good.”

At least one key USAF program will move faster as a result of the pandemic: the artificially intelligent Skyborg wingman drone.

“I’ve … tasked our program executive officer for advanced aircraft to go ahead and begin the production competition for Skyborg to accelerate next-generation air dominance,” Roper said. “I’m trying to send the message to industry in whatever way I can that future capabilities for future dominance are not going to be delayed to deal with the immediate crisis.”