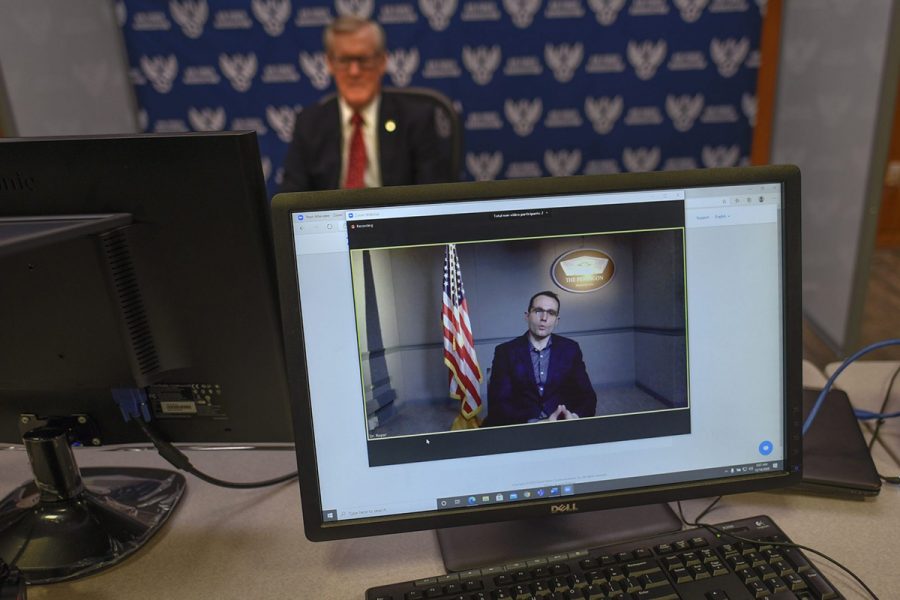 The Air Force will flight test the U.S. military’s first hypersonic missile this month, Air Force acquisition boss Will Roper said Dec. 14 at the inaugural Doolittle Leadership Center Forum. But while having a hypersonic weapon is an achievement, Roper added, it is not a full solution to the challenges posed by increasingly capable peer adversaries.

Roper’s comments came during a conversation with Air Force Association President and retired Lt. Gen. Bruce “Orville” Wright at an event titled “From Acquisition to Lethality.” That event featured a three-general panel with top leaders from Air Force Materiel Command, who spoke from the National Museum of the U.S. Air Force in Dayton, Ohio. The forum was produced in partnership with AFA’s Wright Memorial Chapter there.

Hypersonic capabilities will give the Air Force a valuable stand-off strike option, but may not be quite as crucial to U.S. defense strategy as it was to China’s, Roper said. He pointed to Chinese development to counter U.S. missile defense systems, which are not designed to take on maneuverable, ultra-fast weapons.

Hypersonic weapons development “fundamentally challenges the principle of ballistic missile defense by making the missile non-ballistic,” he said. Those missiles fly lower, using the curvature of the Earth and quick movements to blind defenses to their approach.

“As we field the first hypersonic weapon, and I’m excited we’re doing that, it doesn’t undercut this investment our adversaries have, nor take away the principle of safety that I would expect they hold,” Roper said. “The U.S. has exceptional capabilities, especially in stealth aircraft that can penetrate and put weapons where they wish. So do our adversaries believe we don’t have the ability to target them? I would hope not. Hypersonic weapons just then become another way to do it.”

While stealth weapons provide the U.S. a strategic advantage in penetrated air defenses, hypersonic capability enables a conventional B-52 bomber to stand off at a distance while attacking a well-defended target. In conflict with a country like China, this combination presents “a landscape of problems.”

ARRW was tested this year with the B-52H, and Air Force Global Strike Command expects to also equip the B-1B to carry it. Roper said earlier this year it also could be carried on the F-15. Gen. Duke Z. Richardson, Roper’s military deputy and top USAF uniformed acquisition officer, said Dec. 3 that developing ARRW as a rapid prototype meant the missile will receive operational capability in 2022—five years earlier than if it was a traditional program.

Moving faster—in acquisition as well as in battle—is critical to making the Air Force ready and able to defeat adversaries in an increasingly complex world.

Buying complex weapon systems and waiting years for them to develop and reach the field no longer works, given the rapid evolution of technology in the commercial sector and huge advancements countries like China have recently made, Roper said.

But “we don’t have to wait on technologies anymore” because they are coming faster than the service can even plan for them, he said, thanks to changing approaches to development like digital engineering and tapping into commercial-sector innovations.

Like ARRW, those practices are available to other cutting-edge Air Force projects as well.

The Air Force applied digital engineering to develop and fly its first Next Generation Air Dominance (NGAD) prototype. This approach uses computer-generated models to predict how a system performs before committing to bending metal, when costs rise rapidly. But this requires a fresh approach to acquisition, Roper said.

The good—and bad—news, is this will require massive change in the Air Force—“change how we train, change how we think about requirements, change the entire Air Force end to end,” Roper said.

The Advanced Battle Management System is another program that is driving change. Intended to replace the E-8C Joint Surveillance Target Attack Radar System aircraft, it has grown into a networked “Internet of Military Things” to connect the force in new ways.

A coming ABMS tool dubbed “ReleaseONE” will provide what Roper previously called “a mini-internet instantiated in our mobility fleet,” in the form of a pod that can relay information over local data gateways. That should help combat assets talk when their communications are cut off by enemy forces.

Enabling such connectivity is the concept driving joint, all-domain command and control, but Roper said the JADC2 term has become so ubiquitous that it is losing its punch.

“I don’t know what it means anymore in the means of a traditional operational concept,” Roper said. ABMS must move from experiments to actual systems to prove the concept of a “battlefield vision of the internet” can truly connect sensors and shooters in real time, just like computers and cell phones do now in the civilian world.

“We don’t have to invent a different kind of internet for the military, we simply have to build what works commercially in a military sense,” Roper said.

Two innovation organizations intended to help drive such a future and leverage commercial development are AFWERX—a tech “startup” within the Department of the Air Force to fuel development and connect companies with military customers—and AFVentures, a venture capital-like effort to secure seed funding for small businesses that are creating military-relevant tools.

Both have seen success, with AFWERX using multi-round competitions and conferences to get firms under contract to tackle real problems. AFVentures investments have helped attract other investors, producing a 4-to-1 multiplier effect to further accelerate development, Roper said.

One area Roper said the Air Force must develop quickly is artificial intelligence. Already widely used in commercial solutions for voice recognition, online sales, social media, and more, AI will be a major contributor to ABMS—if only Airmen learn to trust it.

AI can be more effective than humans in certain circumstances, yet duped in others. Nevertheless, as challenges become faster and more complex, even the highest-end weapons platform could be bested by a competitor’s solution if it effectively uses AI.

Without AI, “you are asking people to close their [decision-making] loop against a machine that can make a million decisions before a human can read a display,” Roper said.