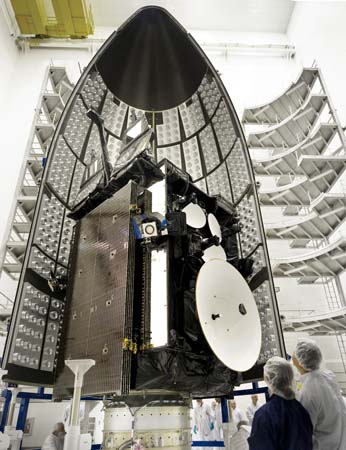 Air Force’s first advanced extremely high frequency satellite, is ready to go for Saturday’s scheduled launch into orbit, Lockheed Martin announced Thursday. The satellite is at the launch pad at Cape Canaveral AFS, Fla., sitting atop the Atlas V rocket that will carry it into space. “The team has executed a smooth and efficient transition to the launch pad and we look forward to achieving mission success for our customer,” said Mike Davis, Lockheed’s AEHF vice president. The AEHF is the new military communications satellite design that will replace the Milstar satellites. It will provide survivable and protected communications at 10 times the capacity of the latest Milstar variant. The Air Force has bought four AEHF satellites so far and would like to start advanced procurement of AEHF-5 in Fiscal 2011. Lockheed is the AEHF prime contractor and supplies the Atlas V as part of the United Launch Alliance.