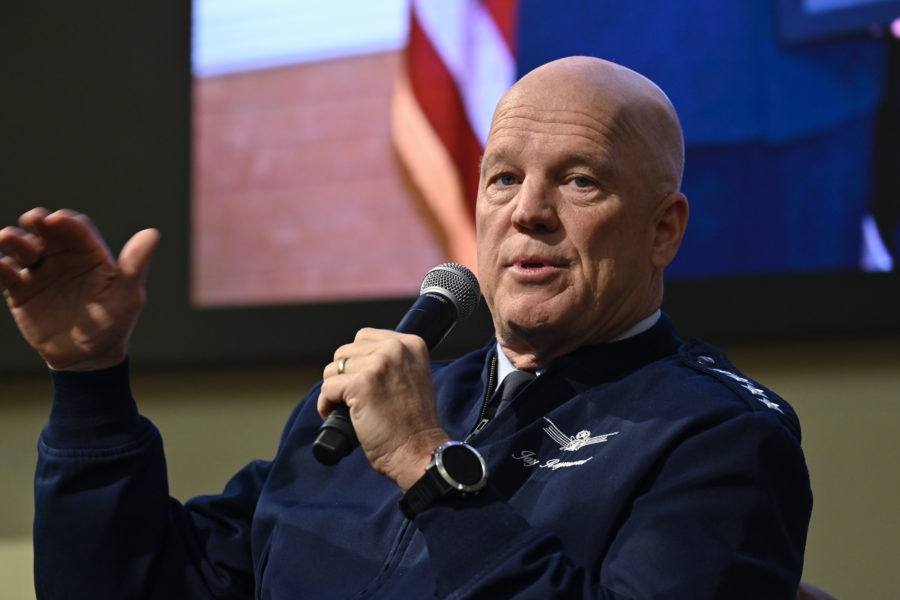 ASPEN, Colo.—Chief of Space Operations Gen. John W. “Jay” Raymond offered some of his early observations on the role of space activities in the war in Ukraine.

After nearly a three-year pandemic hiatus, many of the world’s top national security and foreign affairs officials gathered in Aspen, Colo., for the Aspen Security Forum beginning July 19.

The towering peaks that surround this verdant valley deep in the Rockies offer the ultimate ivory tower from which to contemplate the strategic challenges that lie ahead for the nation. Even this bucolic setting, however, cannot dispel the shadow cast by a world afire with a major war in Europe, resultant energy and food insecurity, and rising political instability across the globe.

“We all see the icebergs,” said Anja Manuel, executive director of the Aspen Security Forum, in opening the conference. “The question of how are we going to turn the Titanic will be the theme that runs through all the panels in this forum.”

Raymond began the discussion with his thoughts on the crisis on the minds of every participant: Russia’s unprovoked, nearly-five-month-and-counting war of aggression against Ukraine. The creation of the Space Force two-and-a-half years ago was itself acknowledgement that at least since the 1991 Persian Gulf War, space has played a critical and increasing role in virtually every major conflict and is a warfighting domain increasingly contested by adversaries such as Russia and China.

“A lot of people ask me, ‘What are the lessons learned that’s come out of Ukraine? It’s too soon for me to sit up here and say, ‘Here’s all the lessons.’ But there are a couple of observations that I have,” said Raymond in the forum’s first “fireside chat.”

The first observation he highlighted was the fact that space is critical to the conduct of modern warfare, whether in terms of precision targeting with GPS-guided weapons or satellite surveillance and intelligence that has created a battle space in Ukraine that some experts believe is one of the most transparent in history. “So my first observation I’d say is that space is important. And we have certainly seen that in this conflict. And I would also say that commercial space has been very important in providing capabilities that have been helpful to Ukraine.”

Indeed, the commercial satellite system Starlink, owned by Elon Musk’s SpaceX, has extended a critical communications lifeline to Ukrainian forces despite repeated Russian attempts to black out the country both with kinetic strikes and cyberattacks. Starlink satellites flying as low as 130 miles above the battle space beam down high-speed internet access, allowing front-line Ukrainian troops in the hotly contested east to communicate with a chain of command that stretches hundreds of miles.

Other malign activities by Russia and China were also high on Raymond’s list of challenges. In November 2021, Russia tested an anti-satellite missile that destroyed one of its own aging satellites, creating 1,500 pieces of space debris that Space Command is now having to track as they hurtle through the vastness of space at 17,000 miles an hour. “What Russia did was a very destructive act—what I would say is an irresponsible act,” Raymond said. As the “space traffic control” center for the world, he noted that hte Space Force has to track that debris and warn other nations when it threatens their space assets. The amount of space debris it tracks has increased from 22,000 objects to nearly 50,000 just in the past few years.

The Russian anti-satellite test follows a similar test conducted by China in 2007 that created 3,000 pieces of space debris. “Of that 3,000 pieces of debris, almost all of it is still up there, and, in fact, we warned China recently that [one of its satellites] was about to hit a piece of debris that they created with that 2007 burst,” said Raymond. “So we are really working hard to establish a rules-based order in space, because today one of our challenges is there are very few rules. It’s the wild, wild West. The United States, working with our allies and partners, is thus trying to develop norms of behavior for what is safe and professional. Because it is irresponsible and unprofessional to blow up a satellite and litter the space domain and threaten the use of that domain by every nation. Space underpins every instrument of our national power.”