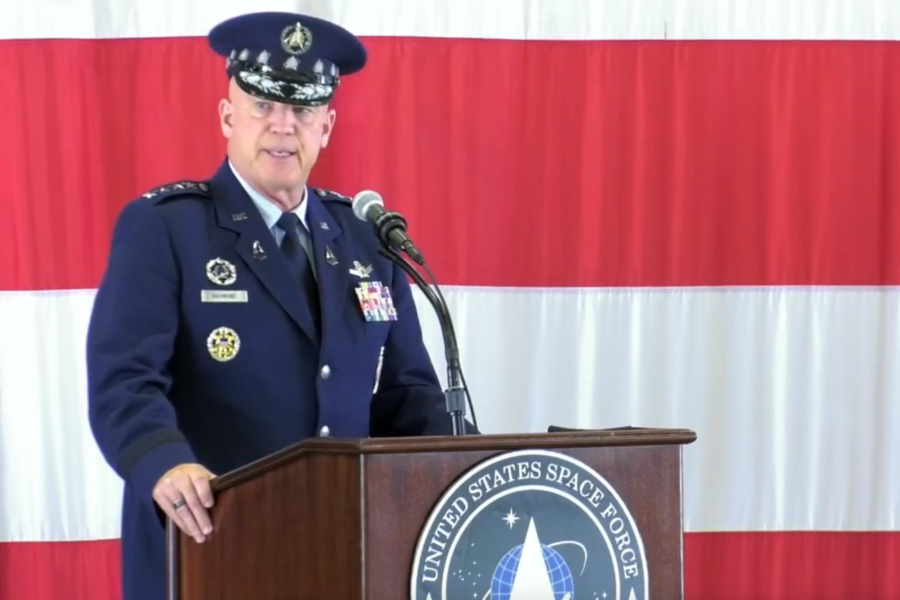 Raymond: New STARCOM Will ‘Shape the Next Century’ of Space Operations

Space Force Chief of Space Operations Gen. John W. “Jay” Raymond referred to the activation of Space Training and Readiness Command, or STARCOM, as a “major milestone in the establishment of an independent Space Force, and the realization of one of the main reasons our nation established a satellite service: to unify national security space efforts and to develop one core cadre of space warfighting professionals.”

Raymond alluded to his past service at the base in his speech.

“I can’t remember the countless numbers of ceremonies that I’ve done in Hangar 140, and I can’t think of a more important one than the ceremony we’re about to do,” Raymond said. “STARCOM has the purpose and the absolute responsibility of developing our most precious asset—our people—by establishing and continuously evolving the tools, doctrine, training, and testing programs for our Guardians starting their first day of service.”

During the ceremony Bratton said he is taking over the command with “undoubtedly the coolest name of all the field commands,” noting later in a press briefing that the command currently comprises about 800 people, including about 50 in the headquarters, which he expects to grow to about 250. He expects the command to grow to “just shy of 1,500 over the next five years.” About 12,000 military and civilian personnel currently make up the Space Force.

Bratton said some training under STARCOM, such as Basic Military Training, “will look familiar,” but he foresees better training than he got when he advanced through the ranks.

“My training was very much on the ground on simulators,” said Bratton, who began his career as an enlisted member of the Arizona Air National Guard. He eventually deployed to serve in Operation Iraqi Freedom, including as U.S. Northern Command’s director of space forces.

“I think if we can grow to on-orbit training where we’re live-flying satellites in a training environment, where we can test and train things that we haven’t done before, I think that would be a huge step forward for us,” Bratton said.

A provisional delta that had temporarily operated in the command’s place, Star Delta, was inactivated during the ceremony.

Raymond, during his speech, delivered a message directly to members of the new command:

“You are setting an incredibly important precedent,” Raymond said. “You are developing the doctrine that will shape the next century of space as an operational and independent domain. You are where the rubber meets the road in establishing a cohesive, unified cadre of space warfare professionals.

“As we train the way we fight, that training starts with you.”