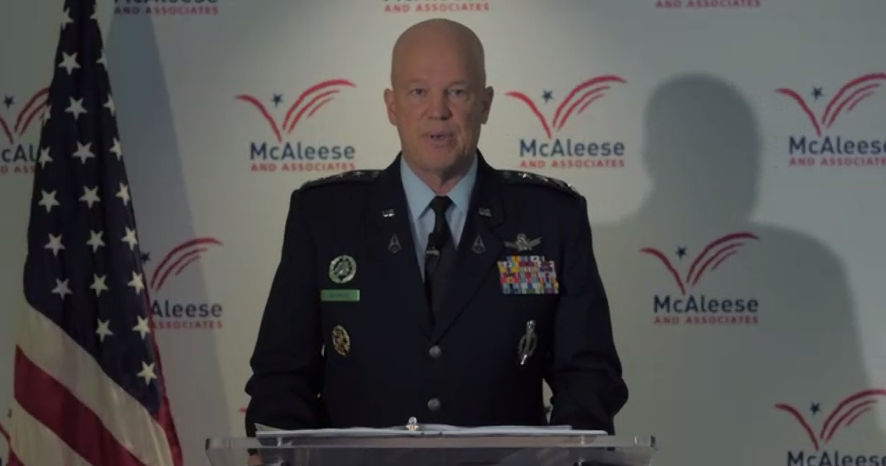 USSF Chief of Space Operations Gen. John W. “Jay” Raymond said that since small satellites have become more operationally relevant and the cost of launches has dropped, “there’s a role here for the Space Force and tactical-level ISR.” U.S. Space Command and the Space Force’s predecessor Air Force Space Command have not typically participated in this role, but now is the time to provide the service in a role that is “complementary” to what already exists, he said.

“I really believe this is an area that we will begin to migrate to, because we can do it and we can do it in a way that doesn’t break the bank and is focused on our joint and coalition partners,” Raymond said May 12 at the McAleese FY2022 Defense Programs Conference.

One specific mission area is GMTI. Space-based tracking of ground targeting is possible through leveraging commercial capabilities. Raymond said to be on the lookout for more on this, though he did not provide specifics.

Space and Missile Systems Center boss Lt. Gen. John F. Thompson, speaking during a May 12 Mitchell Institute Space Power Forum, said, “We look forward to sharing details” on what this will include. There are “many” small and medium businesses, startups, and other organizations that have relevant capabilities already and “we are confident that we can procure … that data in a commercial way.”

The service is also expanding its missions by absorbing systems from the Army and Navy. The services recently reached an agreement on what can move into the Space Force, and Raymond said officials are now finalizing plans.

The Space Force is not “breaking into the other services.” Instead, its roles need to be “value added, not subtracted.” In the service’s first year, it determined which USAF capabilities would transfer, and over the past several months, that work has focused on the Army and Navy.

“It’s those areas where it will increase readiness of both services and the joint force, it will save some costs, and will allow us to develop our people in a way that is more effective,” Raymond said.