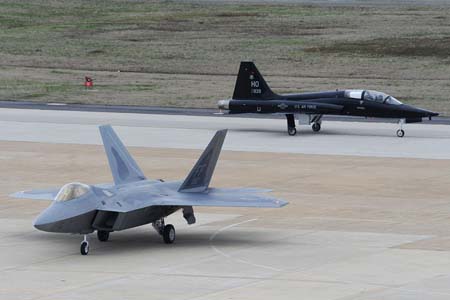 1st Fighter Wing has grown its stable at Langley AFB, Va., by welcoming the first of seven T-38 Talon trainer aircraft. Transferred from Holloman AFB, N.M., this first T-38 forms the basis of Langley’s new Talon Adversary Air Program, which aims to provide cost-effective aggressor platforms to square off against the wing’s F-22s in training exercises. “This T-38 program is a very economical solution to a difficult problem,” said Lt. Col. Derek Wyler, adversary program leader. With fewer fourth generation fighters available in USAF’s inventory, there was an increased emphasis on finding a suitable aggressor, making the Talon’s arrival on April 1 a relief. “The T-38 is small, nimble, and difficult to find in the air,” said 1st FW Commander Col. Matt Molloy. He added, “This [air]plane will punish a Raptor pilot’s mistakes if they make them.” The remaining six T-38s will arrive in the coming months. (Langley report by A1C Jason Brown)