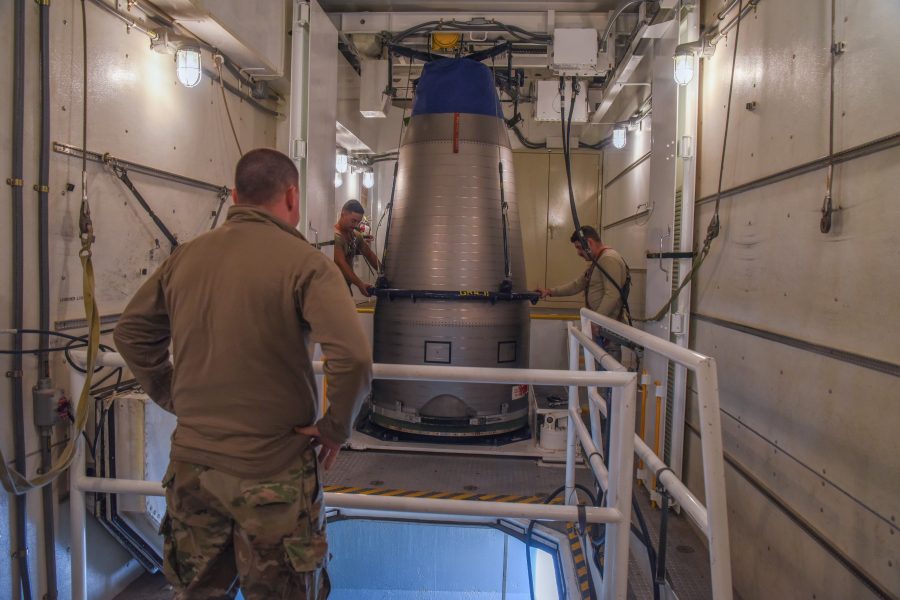 A new report by the RAND Corp. cites support from the White House and Congress for modernizing the nuclear triad, but its authors also offer a stark warning to the Air Force, which owns two of the triad’s three legs, to “not take this support for granted.”

The Biden administration’s original fiscal 2022 budget requested an additional $1.2 billion for the Air Force’s Ground Based Strategic Deterrent program, the replacement for the aging Minuteman III intercontinental ballistic missiles. That’s “a figure slightly higher than had been predicted during the final year of the previous administration,” according to the RAND report, “Modernizing the U.S. Nuclear Triad: The Rationale for a New Intercontinental Ballistic Missile.” The Senate Armed Services Committee’s version of the 2022 National Defense Authorization Act said “the ground-based strategic deterrent is necessary and in the national security interest of the United States.”

Throughout the Cold War, the United States consistently updated all three legs of the triad, with each deployment introducing significant new capabilities, safety, and security features. At the same time, the stockpile continued to grow, reaching a peak of 31,255 warheads in 1969, write the report’s authors, retired Lt. Gen. Frank G. Klotz, former commander of Air Force Global Strike Command, and Alexandra T. Evans, a RAND researcher and professor of policy analysis in the Pardee RAND Graduate School.

But while Russia and China have spent the post-Cold War years modernizing their nuclear capabilities, the United States has repeatedly pushed off that modernization. Now multiple big bills are coming due, with a new nuclear-capable submarine, a new nuclear-capable bomber, and the GBSD, plus updated nuclear command and control, creating a budget conundrum. The most-cited fix is to either completely cut the ground-based leg of the triad or to once again attempt to extend the service life of the Minuteman III. Introduced in 1970, the fleet is already well past its intended 10-year service life.

“Several prominent NGOs have expressed disappointment at the President’s first budget request for nuclear modernization and they continue to urge the administration to defer or adjust the scope and pace of the GBSD program,” states the RAND report. “Additionally, some members of Congress have introduced legislation to pause or cancel development of the GBSD program. Others have indicated that they would support delaying or reducing funding for a new ICBM.

“Even if they are ultimately unsuccessful in the near term, critics of GBSD will likely continue to press for substantial changes to the existing programs of record during future budget cycles.”

The latest Nuclear Posture Review, which will be “nested” within the Biden Administration’s forthcoming National Defense Strategy, expected to be released in “early 2022,” will look to balance a desire to reduce the role of nuclear weapons in national security strategy while also updating and maintaining a safe and reliable strategic deterrent. It also should determine whether the U.S. sticks with the triad or shifts to a sea- and air-based dyad deterrent policy.

The Air Force must be able to articulately defend the GBSD program, cautions RAND. This includes explaining why nuclear deterrence remains a core part of the Air Force’s mission as well as justifying the need for a new ICBM.

“The Air Force would benefit from being more forthcoming in publicly describing the new capabilities that GBSD is expected to provide, both operationally and in terms of sustaining day-to-day operations over the long term,” states the report. “Admittedly, classification issues present complications in openly discussing the evolving threat environment (including adversaries’ missile defense and cyber capabilities) and the ways in which GBSD might mitigate current or future developments. But the arguments currently put forward in defense of GSBD do not convey sufficiently the importance of modernization over proposed alternatives or the potential risks associated with delaying recapitalization.”

Klotz and Evans argue that more transparency is also needed on the cost analysis used to justify modification. It’s not enough, they say, to simply state that it’s more expensive to maintain the Minuteman III.

“Senior defense officials have publicly stressed that the projected cost savings informed the initial decision in 2014 to proceed with the development of a new ICBM, and they have implied that additional calculations undertaken since then have confirmed the original [analysis of alternatives’] findings,” states the report. “However, they have not publicly released information on the breakdown of costs for either extending Minuteman III or fielding a new ICBM. A more-detailed discussion of the methodology employed, paired with more-specific numbers on the program’s historical and projected costs, would help to address lawmakers’ outstanding questions about the adequacy of existing evaluations and inform the debate over whether an independent assessment on costs is necessary.”

Although the report did praise the Air Force for progress it’s made over the last decade touting the importance of its role in owning two of the three legs of the triad, it also pointed out that not so long ago the service “lost its focus on the nuclear mission and on the Airmen who carry it out with serious consequences for the service’s reputation and credibility.”

The RAND report encourages the Air Force to ensure that GBSD program management is “properly supported and resourced” to keep the program on time and on budget.

“The technical, managerial, and resource challenges associated with developing and fielding multiple new nuclear systems—while simultaneously continuing to operate and sustain existing systems until they are fully replaced—are daunting,” states the report. “It will require sustained, high-level leadership attention for many years to come to ensure success in this most important endeavor.”

Editor’s Note: This story was updated at 4:40 p.m. on Jan. 7 with the correct link to the report.