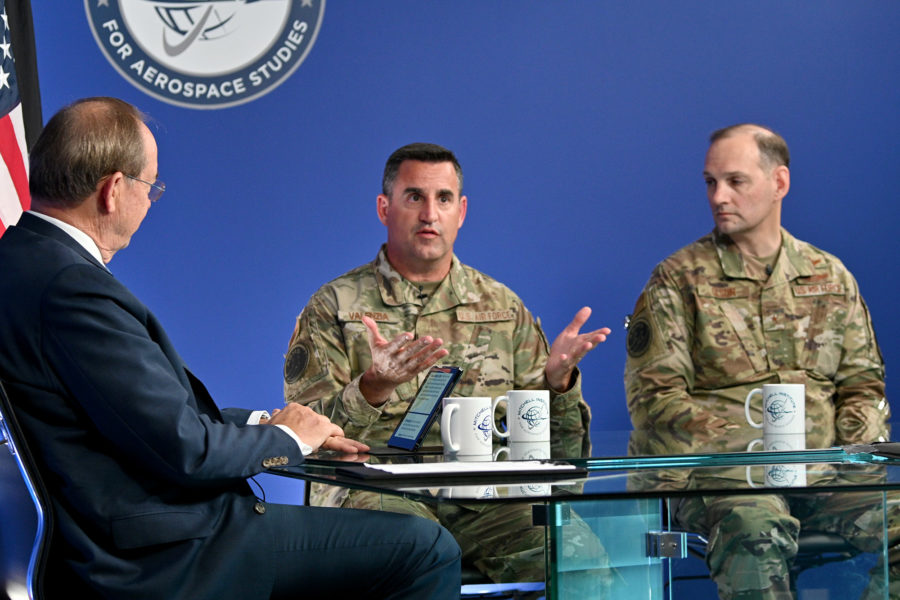 Improving the processes and culture already inherent in battle management command and control could make a bigger difference in the success of the Advanced Battle Management System than any new technology. Some new processes are already being fielded, said leaders who are coordinating ABMS for the Department of the Air Force and the Space Force.

Steps will include figuring out how to separate command from control; how to aggregate sensing data from all platforms; and how to distribute communications, including via a space-based data transport layer.

The militaries the U.S. needs to be able to contend with already take advantage of slow battle management by employing “shoot-and-scoot technologies [with which] they can expose themselves in order to engage us and very quickly disappear before we can close the kill chain,” Valenzia said—the kill chain ostensibly taking as long as hours to close that “in some cases needs to be in seconds.”

“If I’m looking at defending a force that’s in the field,” he said, “what I can’t do is create a system where a commander is making a play-by-play decision as we are executing. I need a control apparatus who simply can execute. … We need to decouple it, and we need to distribute it.”

“Today we take sensors, information, communications, and the people who make these decisions, and we like to put them in a tent, or we put them in an airplane—put them in extraordinarily vulnerable positions—and then we tell them, do the best with what you have, which is oftentimes insufficient,” Valenzia said.

Olson named the E-3 Airborne Warning and Control System (AWACS) and E-8C Joint Surveillance Target Attack Radar System (JSTARS) as no longer sufficient, “and you might even say the traditional air operations center is no longer viable in the modern contested environment,” he said.

On the other hand, “technology,” Valenzia said, “has allowed us now to imagine a world where we don’t have to rely on the sensor that’s sitting on top of my airplane anymore. In fact, I can start to aggregate sensing data from multiple sources. We also are starting to develop the technology that my communications can be more distributed—I can start using space-based communications. Now I don’t need a direct-line-of sight tie.”

But technology made a smaller difference than the services expected when they modeled the effectiveness of today’s command and control processes as though all intelligence data were available ubiquitously.

“We saw a one-third improvement in our kill chain,” Valenzia said—the actual target time is classified and “much shorter than hours.” Next, modeling more stress on the C2 system with “a target reported every couple minutes for a 24-hour period … we saw less than a 10 percent improvement—actually reverse what we expected. We expected to see a compounding improvement with technology.

“And so what you find when you do the hyper analytics is that our process is killing us. So ABMS is not just looking at technical solutions” but also “process improvements, which forces us to come to terms with some old paradigms.”

Meanwhile, “real joint progress that we’re fielding now with our joint partners” means the DAF is “already operationalizing this idea of a reimagined battle management every day,” Valenzia said.

However, a new digital infrastructure to underlie the system of systems can’t be avoided.

“You break a large problem down into functional pieces, manageable pieces, and you systematically tackle that. And I think that’s absolutely the approach that’s been taken, but I think we’re going to accelerate that to warp speed, if you will, on this.”