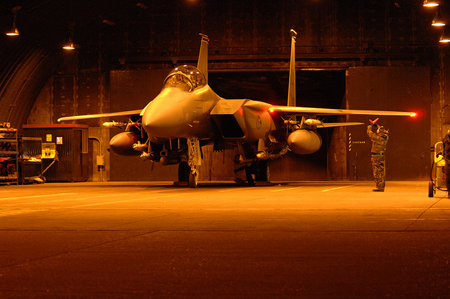 F-15E crashed in northeast Libya late Monday due to an equipment malfunction, US Africa Command officials announced Tuesday. Both crewmembers ejected from the aircraft and are safe in US custody, the officials said. The Air Force hasn’t released their identities yet. US forces recovered one crew member, while friendly Libyans helped the other, treating him with “respect” and offering medical care, Adm. Samuel Locklear, Joint Task Force Odyssey Dawn commander, told reporters Tuesday. The F-15E, assigned to RAF Lakenheath, England, was flying out of Aviano AB, Italy, in support of Odyssey Dawn. It was on a strike mission against a missile site operated by Libyan dictator Muammar Qaddafi’s forces when it went down, said Locklear. He declined to respond to press reports that the MV-22 Osprey that recovered one crewmember possibly opened fire on Libyan villagers, saying the investigation into the mishap would address such questions. “The recovery mission, from my perspective, was executed as I would have expected it to be, given the circumstances,” said Locklear. (Locklear transcript) (See our initial coverage)