Skip to content
Boeing developed a blended wing body design for the X-48 program, which built and flew a subscale demonstrator in 2007. NASA photo.
Expand Photo 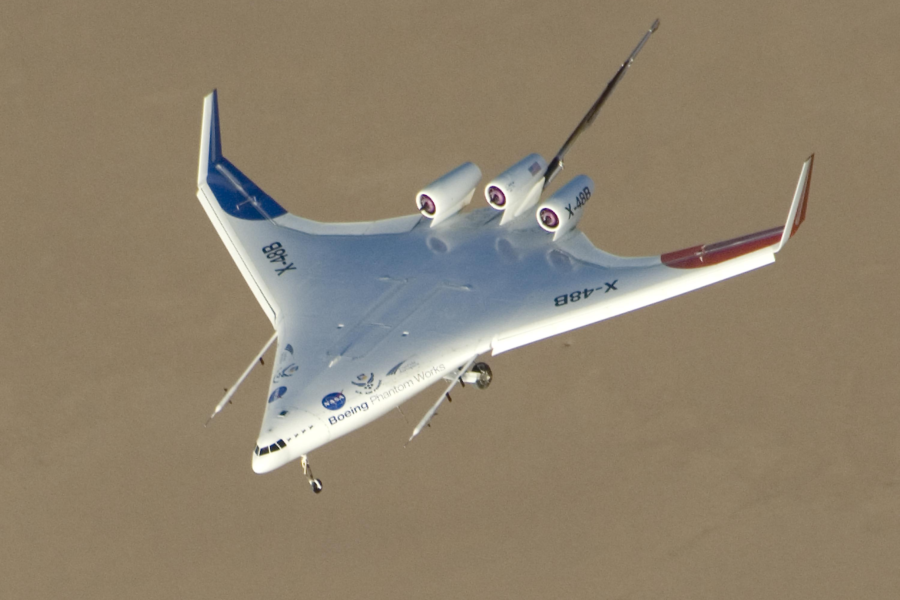 The Pentagon has put out a call for blended wing body aircraft concepts that could be applied to future military tanker and cargo aircraft as well as commercial aircraft, according to a solicitation posted by the Defense Innovation Unit.

The Pentagon wants “concepts of design of an advanced aircraft configuration that provides at least 30 percent more aerodynamic efficiency than the Boeing 767 and Airbus A330 families of commercial and military aircraft, enabling operational advantages such as increased range, loiter time, and offload capabilities,” according to the solicitation.

The Boeing 767 and Airbus A330 are the bases for the KC-46 and KC-30 Multi-Role Tanker Transport, the only strategic tankers now in production.

An Air Force Research Laboratory spokesperson said the solicitation “is not connected to the KC-Y program” but did not say whether it’s related to the KC-Z, which the Air Force has not defined but could be a stealthy aerial refueling aircraft. The solicitation did not mention stealth or low observability, but BWB-type aircraft, as “flying wings,” would likely have a much lower radar cross section than traditional types.

Air Force Secretary Frank Kendall has in recent months cautioned the defense industry that analysis indicates that the KC-Y requirement—a follow-on to the 179-aircraft KC-46 program—seems to be best met by buying more KC-46s, with additional capabilities. Lockheed Martin has said it wants to offer its LMXT tanker, based on the Airbus KC-30 MRRT, for a KC-Y competition.

The blended wing body aircraft concept, because of its potentially large internal volume and aerodynamic efficiency, has been gaining interest from commercial airlines, cargo services, and the military for well over a decade. Boeing developed a BWB design for the X-48 program, which built and flew a subscale demonstrator in 2007 that received high marks. Lockheed Martin has also been promoting BWB concepts for tankers and cargo aircraft for a number of years.

It wants responses to the RFI by Aug. 2.

The RFI noted that the Defense Department consumes 77 percent of all the fuel used by the federal government, “and the majority of that is attributed to fuel for aircraft sorties supporting global operations.” The DIU said that “decades” of research into BWBs offer efficiencies that could sharply reduce fuel burn “and increase operational effectiveness, enabling longer-range sortie and reduced fuel logistics/supply chain risks.”

The solicitation is unusual in that its Air Force sponsor is not the Air Force Research Lab or the Life Cycle Management Center, but the Air Force Operational Energy Office. The DIU is also partnering with the Pentagon’s sustainability enterprise.

The Air Force has said that it is reviewing whether it will extend the service life of the C-17 Globemaster III or seek a new aircraft as its main strategic/tactical transport. It has ruled out a “stretched” model of the C-17 that would increase its internal load, as the service did with the C-141 Starlifter. The C-5M Galaxy underwent a major upgrade and re-engining in the last decade that is expected to keep that type operational into the 2040s.

The DIU said it wants interested companies to submit concepts showing how they will use digital tools and processes to “design, develop, test, verify, validate and certify the system for a possible follow-on prototype build, live-fly, and production.” These are to include engineering models in the Systems Modeling Language (SysML) “in a format that will serve as the Authoritative Source of Truth (ASot) for the entire design.”

It also wants the concepts to have modular, open-systems approaches for integration and upgrades.

Responses are to include the outer mold line and general arrangement of the aircraft; its performance and subsystems; what the risks are and how they can be bought down; a requirement analysis; a system engineering plan; a management plan; a life-cycle cost analysis; and plans for software design and ground and flight test plans. All of these are to come with a technology readiness level indicating their maturity.

Beyond the military applications, the DIU is looking for an analysis of how these aircraft could be applied to the civilian marketplace, with a marketing strategy, target customers, market potential, and the competitive advantages of such designs. The respondents are also to explain how they would manage intellectual property, create a management team, and provide an explanation of “how the commercialization plan would help reduce DOD procurement and life-cycle costs, and increase national security.”

The responses also need to include a manufacturing plan—along with an estimate of when production facilities could be ready to being manufacturing—as well as how these aircraft would connect to the joint all-domain command and control network.