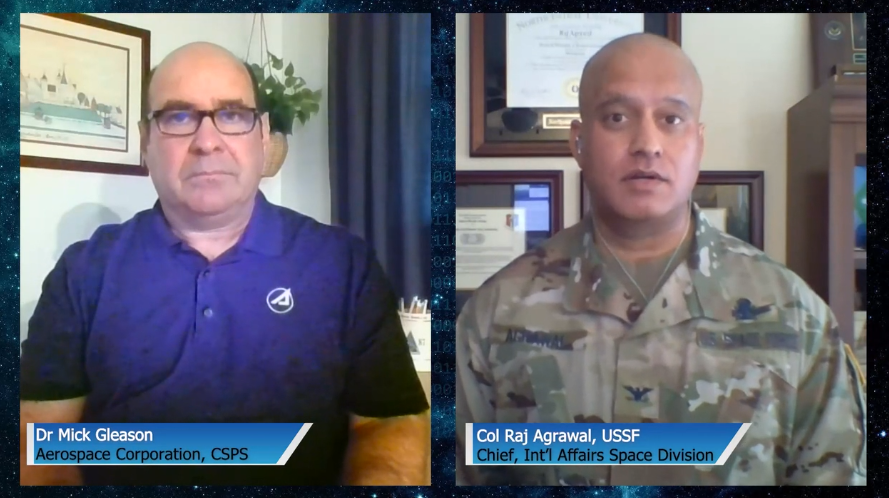 The demand for international space agreements is so high, just keeping up can be a challenge, said Space Force Col. Raj Agrawal.

Agrawal described how the department is responding to the heightened demand during the Jan. 27 episode of The Aerospace Corp.’s “The Space Policy Show.” He also mentioned other changes taking place at the Pentagon and at Space Force field commands to involve more countries in U.S. military space activities.

Chief of the Secretary of the Air Force’s International Affairs office’s Space Division since July 2021, Agrawal brought to the job experience working in five different air or air and space operations centers, where his role was “to use space to make everything else more effective,” he said. His deployments exposed him to the process of “allies and partners working together, fighting together, and building relationships.”

Serving in South Korea and in the U.S. Central Command area of responsibility “with a whole host of allies and partners” introduced Agrawal to some of the international personnel he works with now. “A lot of those relationships have really become so important now in my current job,” Agrawal said. “We recognize each other from years ago being deployed together.”

Growing from a few people to more than 20 and still hiring, Agrawal said his division is “a very fast-moving, responsive division that focuses on what Gen. Raymond wants to achieve,” referring to Space Force Chief of Space Operations Gen. John W. “Jay” Raymond. The new jobs are part of the Space Force headquarters’ ultimate total of 600.

The division is “wholly focused” on helping the Space Force to build partnerships “and, what’s more, for us to build spacepower capacity,” Agrawal said. Traveling with Raymond when he meets with international counterparts, the division drafts partnership agreements based on the outcomes.

“So now each of the field commands have an international affairs partner mission and are making available all of the security cooperation tools that we have on the U.S. Air Force side, now on the U.S. Space Force side. It is thrilling to see happen,” Agrawal said. “If you could see inside the machine, I think you’d be impressed.”

Advantages of international cooperation to the U.S. include adding to what Agrawal refers to as “passive spacepower capacity.”

For other countries, goals and advantages vary.

“Most nations that have any technological capability, they become more effective, and become more efficient, by integrating space … all across the spectrum of their power,” Agrawal said. “And they also recognize that there are nations such as China and Russia having disrupted that efficiency, and they want to partner with us.”