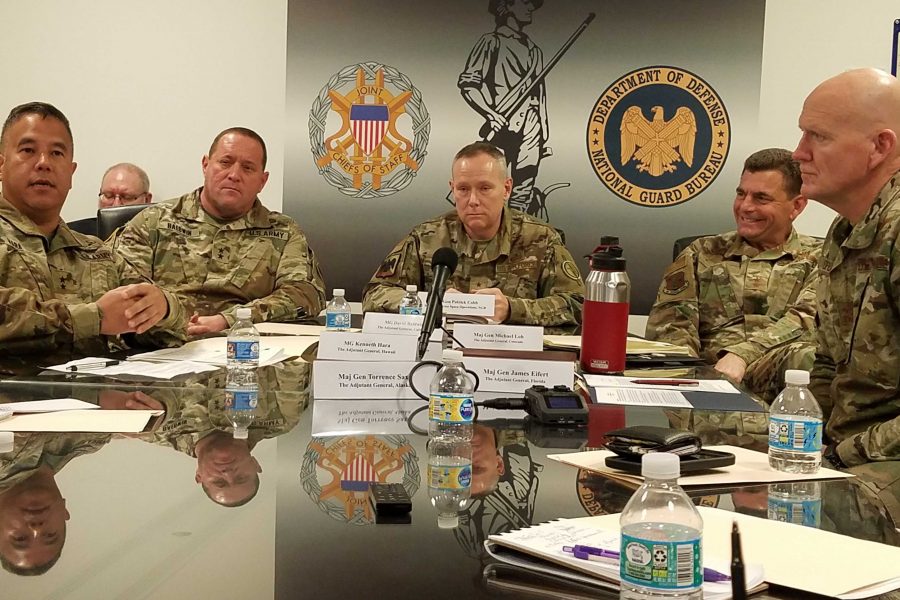 National Guard officials are pushing for the Defense Department and Congress to create a Space National Guard, despite some uncertainty within the Pentagon about how to move forward.

The Office of the Secretary of Defense is drawing up multiple options for what the Space Force’s Reserve component might look like, including creating a single-component service with full-time and part-time employees instead of traditional Reserve or National Guard units, or possibly ditching the reserve component altogether, said Maj. Gen. David Baldwin, California’s adjutant general.

“They’re obligated to look at all the different options and courses of action,” Baldwin told reporters at a Feb. 12 briefing. “We don’t really know what [a single component] means, but they’re, again, doing their due diligence and they need the time to be able to churn through that.”

Congress stopped short of authorizing a Space Reserve or a Space National Guard in the Fiscal 2020 National Defense Authorization Act, but could add language to green-light them in future legislation. The Air Force plans to detail its thoughts on a space reserve component in a report to Congress due March 19.

Colorado Adjutant General Maj. Gen. Michael Loh said the Air Force’s first Space Force organizational report to lawmakers earlier this month sparked questions among some people who thought they would see USAF come out with a firmer plan to integrate those who aren’t on Active duty.

“I would say I’m concerned, because they had an opportunity to put it in,” Loh said. “They’ve looked at this and studied what they want a Space Force to look like for years now.”

He’s told wary subordinates to focus on their mission in the meantime.

“The model’s there for success,” Maj. Gen. James Eifert, Florida’s adjutant general, said of the National Guard. “You can study something into oblivion and never move forward, and in the meantime, you’re losing that capability and the opportunity to really get things started.”

Whether the Space Force should have Reservists and Guardsmen has been a point of some contention. Those personnel already exist, and the Air Force argues they are a valuable part of the new service. Others say they aren’t sure of the need for the states to have their own space operators with a mission that doesn’t always fit the part-time nature of the Guard.

About 1,500 space personnel serve in the Air and Army National Guards, including around 1,100 Airmen. Eight states—Alaska, Arkansas, California, Colorado, Florida, Hawaii, New York, and Ohio—and Guam have National Guard space units. Some of those service members have jobs like flying the Milstar constellation from California, and others are part of expeditionary units who deploy to support combat operations overseas.

Even as places like Hawaii and Guam expand their military space capabilities within the National Guard, officials argue the U.S. may not need individual Space National Guards for every state and territory.

“We really only see there being some additional overhead in the particular states that participate in the mission, so the concern that this would be creating this huge bureaucratic overhead is not what we envision,” Eifert said.

“Operationally, we’re ready to do it immediately because we’re already operating as space forces under the auspices of either the Army or the Air National Guard,” Baldwin added. “It’s all the administrative minutiae that has to get sorted out about which service will be responsible for which function.”