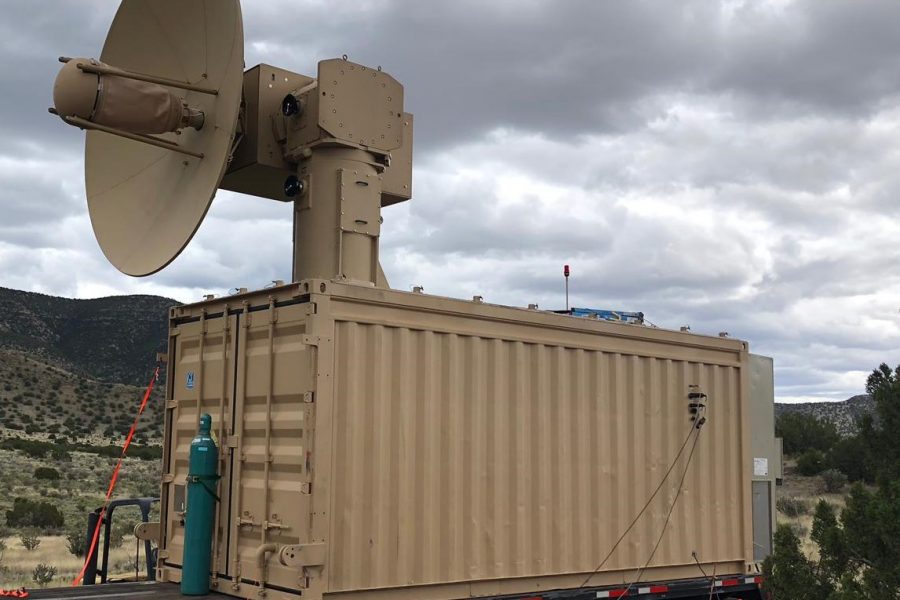 The Air Force Research Laboratory announced April 6 it has kicked off its overseas demonstration of directed-energy weapons dispatched to take down threatening unmanned aircraft.

While the demo has long been in the works, AFRL revealed that its Tactical High-Power Operational Responder (THOR) system will join four Raytheon-built laser and microwave weapons in the assessment. Microwaves interfere with a small drone’s electronics to stop or redirect them, while lasers burn a hole in the fuselage.

“THOR is a directed energy game-changer,” Kelly Hammett, AFRL’s directed-energy director, said in a release. “Drones are becoming more and more pervasive and can be used as weapons intended to cause harm to our military bases at long standoff ranges. … THOR, with its counter-electronic technology, can take down swarms of drones in rapid fire. This capability will be an amazing asset to our warfighters and the nation’s defense.”

Air Force Magazine reported last year that the THOR microwave is built to tackle multiple short-range targets at once. Though the service is often hesitant to say exactly how many drones could be downed as a swarm, it has tried attacking more than a dozen at a time. BAE Systems created THOR with the Air Force Research Laboratory. Leidos and New Mexico-based Verus Research contributed to its design as well, according to the Albuquerque Journal.

“The differences with the three [laser] systems are minimal,” said Michael Jirjis, who oversees base defense experimentation in the Air Force’s Strategic Development Planning and Experimentation Office. “We have made slight changes based on input from lessons learned through our acceptance and overseas analysis, but at this point those have been minor and they are the same system.”

THOR is a second-generation prototype that builds on what the Air Force has learned from Raytheon’s earlier PHASER project, which aimed to prove its viability in a counter-small UAS role, Hammett told Air Force Magazine.

“Based on lessons learned in field testing and experimentation with PHASER in 2017-2018, AFRL intentionally designed THOR to be more user friendly to the operator (including a single video game-like interface), be rapidly transportable in a C-130, be rapidly erected or taken down in the field environment to enable greater transportability in theater, and be capable of both stand-alone cSUAS operations with its own detection and cueing capability, or readily integrated into existing detection/cueing/C2 systems already employed overseas,” Hammett said.

The systems also have classified differences in their power and range.

Military officials worry that commercially produced, cheap drones can spy on base operations and carry explosives, and could prove catastrophic if sucked into a jet engine. Protecting bases from those unmanned aircraft is a top Air Force priority that has become the focus of the service’s directed-energy experiments over the past few years.

USAF has vetted a range of systems at the White Sands Missile Range in New Mexico as well as at the Army’s Maneuver Fires Integrated Experiment in Oklahoma, judging how easy each weapon is to use, how effectively they confuse and destroy unmanned aircraft, and how well they integrate with other DE systems and command-and-control software.

The service is not disclosing where the tests will take place, though the systems could become a permanent fixture there if they succeed.