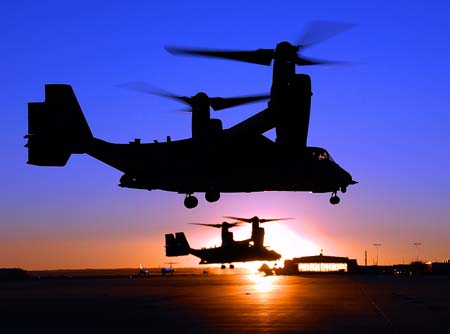 Pentagon’s fleet of V-22 Ospreys—comprising Air Force CV-22s and Marine Corps MV-22s—has surpassed 100,000 flight hours. An MV-22 operating in Helmand province, Afghanistan, arrived at the milestone for the fleet last month, announced the tiltrotor aircraft’s manufacturing team, Bell-Boeing, Tuesday. “At 100,000 flight hours, safety, survivability, and mission efficacy have become hallmarks of the operational fleet,” said Mitch Snyder, Bell-Boeing’s deputy V-22 program director. The V-22s amassed these hours in combat, humanitarian, training, and test and evaluation missions on land and at sea, according to Bell-Boeing. They accrued almost half of the hours in the last two years. Air Force Special Operations Command CV-22s and marine MV-22s have participated in 14 combat and humanitarian deployments since the platforms began flying operationally in 2007. More than 130 Ospreys operate today. CV-22s first deployed overseas in October 2008.