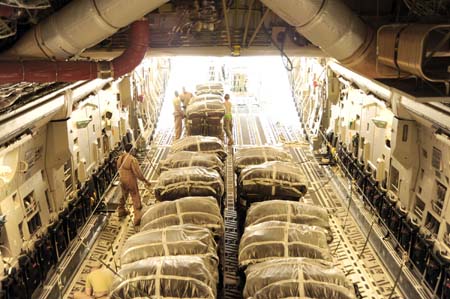 of the 816th Expeditionary Airlift Squadron have set a new airdrop mark for a C-17 unit. Over the course of a week, these airmen dropped nearly 1.2 million pounds of supplies to 22 different drop zones in Southwest Asia during a surge of activity dubbed Operation Everest. The unit conducted this operation to show Air Force Central planners all that it can bring to bear utilizing new efficiencies. “We’re a smaller squadron than we’ve had historically, so we’re trying to figure out ways that we can continue to put mass on the drop zone with fewer people,” said Lt. Col. Michael Snodgrass, 816th EAS operations officer. Among the accomplishments, the unit flew three airdrops in one day using one aircraft and two crews as well as three airdrops in one day with one aircraft and crew. (379th AEW report by SSgt. Tim Jenkins)