Opening Up In the Arctic 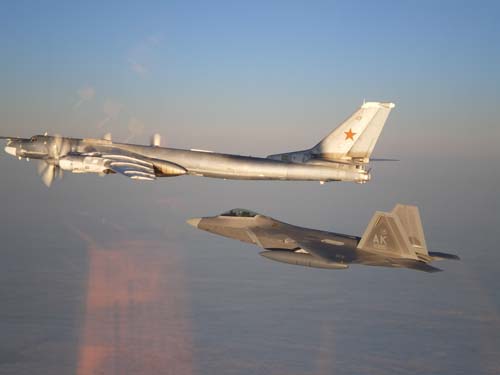 mander of US Alaska Command and 11th Air Force since May, tells the Daily Report that he is working on building mil-to-mil ties with the Russian Far Eastern Military District as part of his new assignment. In an interview June 13 in his headquarters at Elmendorf Air Force Base, Atkins said he and Gen. Victor Renuart, commander of NORAD and US Northern Command, want to invite one of the FEMD commanders to visit Alaska. The meeting would allow Atkins to introduce himself and create an opportunity to establish a professional relationship. One of the issues that Atkins said he would like to discuss with his high-level Russian counterparts is the US military’s concern over the ramp-up of Russian military aircraft patrols near US airspace since last year. The Russians have justified their increased air activities in the region by saying they need to train their pilots in skills such as long-range navigation. Further, they have made disputed territorial claims to portions of the Arctic region. Atkins said US concern revolves around aviation safety and the fact that the Russians have not been filing their flight plans as is the accepted norm under International Civil Aviation Organization procedures with air traffic controllers in and around Alaskan and arctic airspace. ICAO flight plans would provide more transparency into the Russian flights by including information on routes, speeds, and altitudes. “It seems too simple to say, but if they would just adhere to the protocols that we have all accepted, then I think a lot of the perceived tension will evaporate,” Atkins said. He pointed out that Russia and the US already partner in the region on a host of other activities, such as a planned survival search-and-rescue exercise that is scheduled to wrap up in October. “We have strategic common interests,” he said.