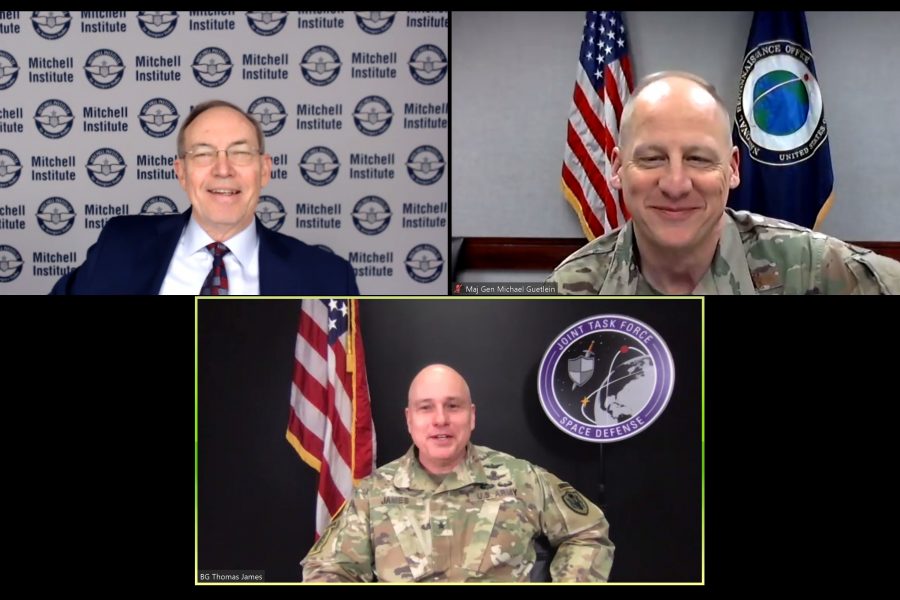 The National Reconnaissance Office and U.S. Space Command are still shaping a new concept of operations to settle the question of who should defend the various pieces of the military space enterprise, the NRO’s deputy director Maj. Gen. Michael Guetlein said during an April 24 Mitchell Institute for Aerospace Studies event.

A forthcoming joint CONOPS document will help guide future investments and operations. Guetlein did not provide a timeline for finishing that work.

Last year, SPACECOM and the NRO agreed to form a joint command structure for space operations to be run out of the National Space Defense Center in Colorado. That command would allow the military to operate and control secretive intelligence community assets if an attacker goes after U.S. satellites.

The more systems on orbit that need to be defended, the more sensors that are required, Guetlein said. Those sensors will pull in a larger trove of data that has to be sorted, as well.

“We’ll need to understand patterns of life and we need to be able to rapidly discern intent,” he said. “We are going to need a lot of help.”

Commercial systems will play a growing role in that future space architecture, spurring additional concerns about whether and how the military should protect them. NRO wants to buy what it can more affordably from nontraditional defense contractors and build only what it must for the most specialized intelligence, surveillance, and reconnaissance needs.

“Commercial imagery is an integral part of the current and future architecture of the NRO, especially for our [geospatial intelligence] collection,” Guetlein said. “Our customers’ requirements are changing. They need both high resolution and rapid revisit. They need greater persistence and spectral diversity. Commercial imagery can help satisfy these diverse needs and we’re seeing a lot of advancements.”

James added that SPACECOM can take some of the pressure off of more exquisite military-specific assets by relying on commercial systems in certain roles as demand builds for space-based ISR.

As the two organizations grow increasingly close, the defense and intelligence communities hope to improve communication by setting up a tightly integrated network of intel-collecting satellites and other systems that can share data faster using artificial intelligence and machine learning. The Space and Missile Systems Center and the NRO, as well as the military and IC more broadly, must also sort through their cultural differences to act in lockstep.

“These two communities have traditionally had two very different approaches to the problem sets we face and operate in vastly different environments on very different timelines, which can complicate getting the valuable intelligence information, data, and analysis from the IC to the commanders and warfighters operating at the tactical edge in near-real time,” Guetlein said.

They are pursuing joint data standards with the Space Force and SMC so the myriad software systems employed across the space enterprise will be able to send and interpret the data collected by others. The Air and Space Forces have also tackled the issue of data roadblocks for years, looking to overcome unnecessary classification and share information more broadly between career fields.

Those improvements will aid collaboration with allied and partner nations during space operations and strengthen ties with the companies that lend their products to the military space network. It will also fuel the space and intelligence contributions to the Pentagon’s joint all-domain command-and-control vision.

“We’re building a shadow ops cell to allow us to experiment now with systems that we think we’ll have in the near future,” James added of the Joint Task Force-Space Defense at Schriever Air Force Base, Colo. “I’d like to see a focus on virtual, collaborative training that allows us to do that across the community with all of the interested stakeholders.”