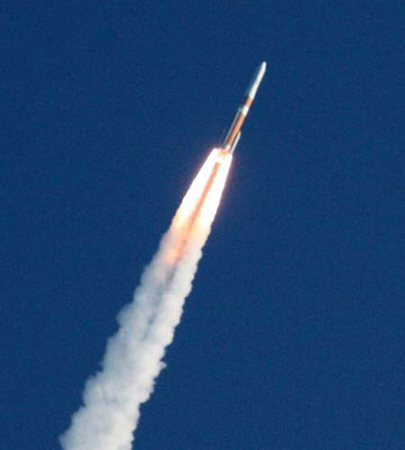 Air Force and its industry partners launched the third GPS Block IIF satellite into space on Oct. 4. A United Launch Alliance Delta IV rocket carried the Boeing-built positioning, navigation, and timing satellite aloft from Cape Canaveral AFS, Fla. “Once again, the 45th Space Wing, working in concert with our talented mission partners, is delivering space assets that will greatly benefit our nation,” said Col. Robert Pavelko, the wing’s vice commander and the mission’s launch decision authority, in a wing release. This was the first launch of a GPS satellite this year, according to the Space and Missile System Center’s release. The Air Force expects to set the satellite, designated SVN-65, “healthy” for navigation users in approximately 90 days for an extended navigation signal test, states the release. Controllers confirmed initial contact with the satellite several hours after its launch, according to Boeing’s release. Block IIF satellites are designed to provide greater navigational accuracy, a more secure and jam-resistant military signal, a more robust civil signal, and an extended design life. The first IIF satellite entered operational service in August 2010, followed one year later by the second IIF satellite.