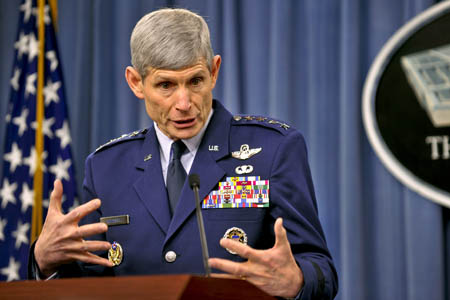 Air Force will come down “in the neighborhood of 10,000 personnel” across the Total Force—the active duty component, Air National Guard, Air Force Reserve, and USAF civilian cadre—between Fiscal 2013 and Fiscal 2017, said Chief of Staff Gen. Norton Schwartz. These reductions “are directly connected with the force structure adjustments that we’ve undertaken,” he told reporters during a Pentagon briefing on Jan. 27 outlining how the Air Force will implement the Obama Administration’s new defense strategic guidance. He added, “We are not reducing personnel in order to meet budget targets.” The Air Force, though smaller, will be more flexible and readiness will not suffer, he said. The goal will be, “as a norm,” to manage the active duty component at an operational deploy-to-dwell time ratio of not less than 1:2, and no less than 1:4 for the Air National Guard and Air Force Reserve, he noted. (Schwartz transcript)