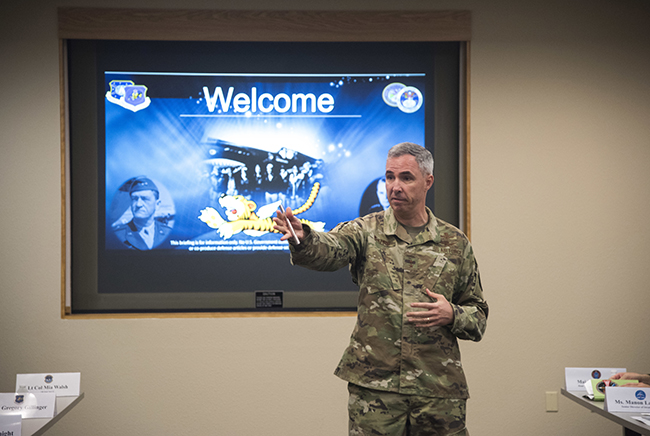 A newly formed organization under US Space Command is looking to strengthen its ties to foreign nations, other parts of the federal government, and commercial industry, its boss said Nov. 15 in Washington, D.C.

Maj. Gen. Stephen Whiting, who runs the Combined Force Space Component Command under SPACECOM at Vandenberg AFB, Calif., is in charge of providing military officials around the world with space services from GPS-enabled navigation to communications and missile warning. He also runs 14th Air Force, the service’s group that provides people and resources to the CFSCC and SPACECOM.

The CFSCC was created in August when SPACECOM stood up as the military organization that manages daily space operations. Since then, Whiting has made a “deliberate effort to widen our support to international, interagency, and commercial partners,” he said at an industry breakfast hosted by AFA’s Mitchell Institute for Aerospace Studies. Foreign nations rely on US space capabilities to participate in coalition operations overseas.

“If these critical partners do not have freedom of action in space, then we have not achieved space superiority,” said Whiting, who is slated to become deputy commander of Air Force Space Command. “It’s that simple.”

The US is gradually adding more foreign representation into Whiting’s organization and the Combined Space Operations Center that coordinates space defense between the US, ally and partner countries, civil agencies, and industry.

For example, the United Kingdom over the summer agreed to be the first international partner to formally join Operation Olympic Defender, America’s ongoing work to “strengthen deterrence against potential possible actors in space and to prevent the spread of debris on orbit,” Whiting said.

Other countries are working through the approval process to join Olympic Defender as well, though the two-star general said nations are still figuring out what each could contribute to the operation and the “national caveats” those forces would need to take part in US-led military space ops.

The Royal Air Force and Royal Canadian Air Force will send intelligence, surveillance, and reconnaissance personnel to the US to take part in analysis, collection, targeting, and training as space ISR practices evolve. France, Germany, and the UK are embedding liaisons at Vandenberg for further collaboration. Japan is eyeing the option as well as looking to create its own national space operations center, Whiting said.

“We are also on the cusp of signing an agreement with Japan for a shared payload that will increase our space domain awareness in the region surrounding [US] Indo-Pacific Command,” he said. “We continue to explore partnerships to increase interoperability between our forces, particularly in the area of protective tactical military satellite communication, and space command and control.”

As the US and its partners build out their own capacity to track military assets in space, the Department of Commerce is taking on the typical work of space situational awareness for non-military purposes—acting as a sort of traffic cop for the growing number of consumer-grade systems heading to space.

Following a White House directive that makes Commerce, not DOD, responsible for sending information to satellite operators in situations where their spacecraft could collide with space debris, a senior Commerce official is now living and working at Vandenberg to figure out how to take on that work.

“We are focusing on search-based operations, on the ability to maintain [tracking] and custody of all the threatening objects in space and ensure that our high-value assets are protected,” Whiting said of DOD. “It’s a shift away from the way we’ve done things in the past to focusing on the military-unique missions we have to execute going forward.”

The commercial sector is shaping how Whiting’s organization approaches industry in two ways: a commercial integration cell, which lets the CFSCC share information in real time with eight satellite owners and operators during routine work or unplanned incidents; and combat development divisions, meant to scout out new technologies and give them to service members faster like US Special Operations Command does.

“They will not only improve CFSCC’s ability to innovate, they will also help our enterprise navigate through the uncertainty and technology disruption of the entrepreneurial space race” at lower cost and risk, Whiting said. “We’re already starting to see returns with just a few small pilot programs. For example, our combat development divisions helped … launch the DOD’s first development platform for building and hosting cloud-native military software applications.”

Some of that code will be deployed to a space operations center this month.

Whiting added that commercial integration cells could spread across the space enterprise to continue forging a closer relationship between the military and that part of industry. Working with companies in new ways and piecing together those technologies will be a challenge for all governments, not just the US.