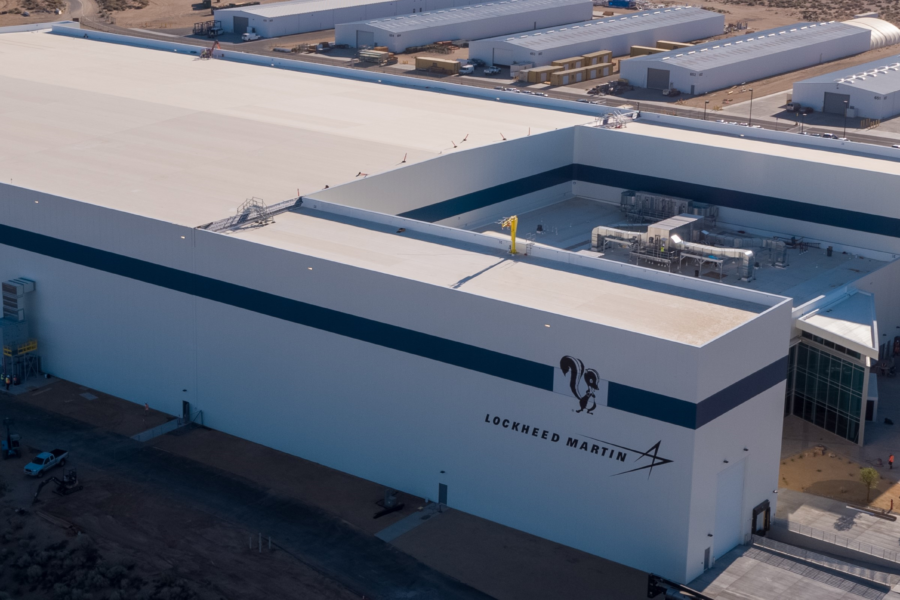 What will be built here first is a secret, but Skunk Works Vice President and General Manager Jeff Babione said he anticipates the facility—at the Air Force’s sprawling Plant 42 complex—will build fighters; intelligence, surveillance, and reconnaissance aircraft; hypersonic missiles; and other advanced projects, with possibly more than one project in series production at a time. He declined to say specifically whether Lockheed Martin will build Next-Generation Air Dominance fighters at the plant.

“This is a one-of-a-kind facility,” Babione told reporters in a press conference. One of four new factories to be opened by Lockheed Martin nationwide this year, it is an “intelligent, flexible” facility where there are “no permanent structures…there’s nothing drilled into the floor,” he said, allowing the plant to be reconfigured at will for efficient, flexible manufacturing. This flips the concept of most factories—such that for Lockheed Martin’s F-35 fighter in Fort Worth, Texas—designed specifically to produce a particular product.

“We have flexibility about where to put what you’re building within this massive floorplan,” he said. “Rather than the work coming to the robot, the robot will go to the work.” Robots will be able to perform one operation “on one end of the factory in the morning, and a completely different operation at the other end in the afternoon. So you’re going to see a significant increase in automation.”

The robots are commercial machines that Lockheed Martin will program. The software to make them do an operation “does not have to be resident” in the system, Babione said. This reduces cost because the same equipment is not dedicated solely to a particular function or program but has application to many projects.

One 27,000-pound robot on display in the new space can move on casters or on cushions of air for fine adjustment of positioning.

The robots “will talk to each other,” Babione added. “How are we doing with cutter speed? Cutter sharpness … do we need to change things? How is the quality of the holes [being drilled]?” Other innovations include advanced test capabilities for wire bundles and laser systems that can spot out-of-tolerance part thicknesses to the thousandths of an inch.

“This will be the first factory at the highest level of classification but has Wi-Fi inside,” to enable the speed of information and allow the “men and women working in that environment” to know the status of the equipment and processes at all times, he said.

The new plant will likely focus on final assembly, with parts produced at other areas of the campus and by vendors. Lockheed Martin is creating partnerships with a number of suppliers such as Spirit Aerosystems to digitally design and manufacture parts with very high precision.

“There will be no paper, only iPad-like devices,” Babione noted. The workers will have access to augmented reality systems to troubleshoot and determine the best ways for robots to execute the work in addition to developing better designs.

The cavernous plant is environmentally controlled to stay within 2.5 degrees of a set temperature in order to minimize changes of the materials in response to heat or humidity, so that joints line up as they were designed to do using digital thread methods.

“The components that make up the different vehicles that we are manufacturing have different coefficients of expansion,” Babione explained. “Composites are different than steel; steel is different than titanium; titanium is different from aluminum.” It’s important that they be assembled “at the same temperatures” at which they were manufactured, he said. “That’s how we eliminate the need to do drilling in that facility.”

The massive air conditioning system will be powered by a new solar farm adjacent to the plant with 52,000 solar panels. Lockheed Martin is working with the state and county to get the permits.

While Babione could not give an estimate as to how much the speed of work will increase versus traditional factories, he characterized it as “significant reductions … not only in design, but certainly development,” amounting to “almost a step function change” in time to complete work.

“That’s what our customer was asking for … how do we go from concept to capability much faster. The technology allows us to dramatically accelerate that life cycle,” he said.

Small batches of products can be made more efficiently in the plant.

“Not only did we not design it for anything in particular, we can design and build multiple assets within the same footprint, something that we really can’t do very well in our current arrangement,” so, “we can now bring [the values of] capacity/quantity to multiple programs” that may not be built in large numbers. “We absolutely see a future where this facility is building multiple types of platforms.” He mentioned large-scale production of hypersonic missiles as one possibility.

The new plant will also require 450 new employees at Skunk Works in Palmdale, adding to the unit’s rapid growth. Babione said advanced development has trebled its workforce—resident in Palmdale, Fort Worth, and Marietta, Ga.—since 2017, to about 5,600 employees. Those employees are heavily oriented toward engineering and administrative support, Babione said. But “the mix is changing … growing significantly in the manufacturing and labor area because we’re expanding this facility.” He also said “we are opening up a new classified facility in Marietta, as well, so I do see a significant shift … as we transition to these core manufacturing capabilities.”

Why Marietta? “We’re running out of space,” Babione said. While this pushed the production of the new plant, which has a height of about 80 feet, there is “significant unused space in Marietta. This is a great opportunity to take advantage of that as well as add capability. We don’t have any classified manufacturing space in Marietta.”

The huge investment—Babione referred to $400 million pumped into the local economy—suggests a business case for large-scale production at the site rather than the low-rate, small-volume Skunk Works production programs of the past, such as the F-117, SR-71, and U-2.

“What has changed is that the cost of technology has come way down,” Babione said. “Think about what a robot cost 20 years ago; very few people had a robot because of the massive cost … it had to have this tremendous business case.”

At the same time, customer expectations have changed, and “we have got to compress this timeframe” from concept to production, Babione said. “And that comes with a significant drop in the cost of products and services.” The new factory is not a matter of “should we do it … but, we have to do it, to meet the objectives of our customer, both from a cost and schedule standpoint” he said, adding, “things that work for our customer ultimately work for us.”

The increased production volume will also help Lockheed Martin recruit and retain workers for future advanced projects, which is “what we live for,” he said. Designing and prototyping advanced systems is “still the hallmark of what we do at Skunk Works. … It’s X-planes, advancing the state of the art, doing things that no one’s ever done before, that is at the core of what we do here.”