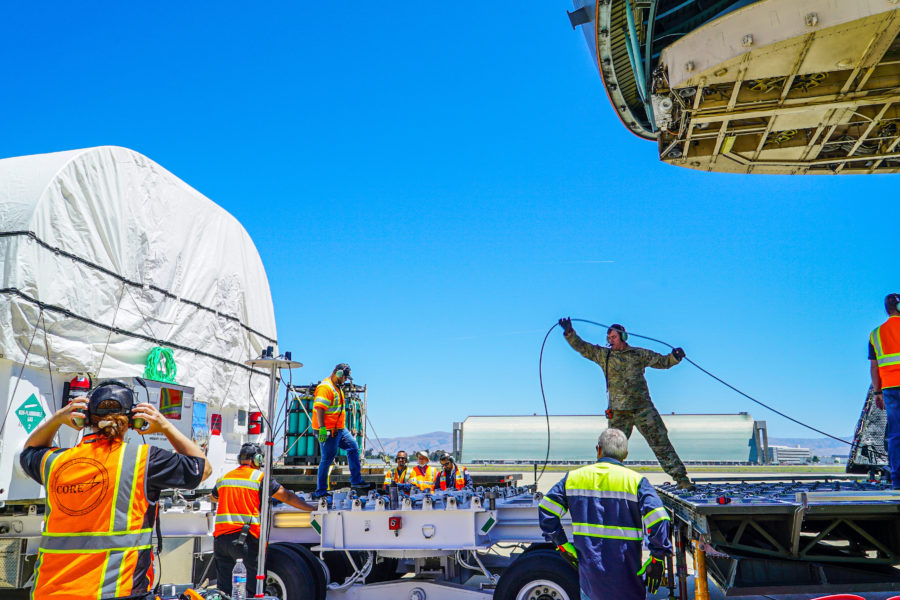 The Space Force’s sixth and final satellite in the Space-Based Infrared System heads to geosynchronous orbit as soon as Aug. 4, the faraway orbit offering a wide view of Earth to detect missile launches in the atmosphere.

The sixth satellite in the constellation adds “crucial fortification of the current missile warning system” that is “global, persistent, and taskable,” said officials who briefed reporters about the mission by phone Aug. 1.

The infrared sensors onboard SBIRS GEO-6 are identical to those on the other five SBIRS satellites, the first of which launched in 2011. But the new entry adds to the constellation’s accuracy in detecting missile launches anyway because of the satellites’ overlapping fields of view, said Col. Brian Denaro, program executive officer for Space Systems Command’s Space Sensing Directorate at Los Angeles Air Force Base, Calif.

“When you get multiple looks at a single launch, it really helps with the accuracy and assuredness of that launch,” Denaro said. He called SBIRS GEO-6 “another critical, unblinking eye to track and defend against ballistic and hypersonic missile threats.”

Able to monitor a third of the Earth at a given time, the SBIRS satellites’ two infrared sensors—one that scans and one that stares—provide “rapid notification” of a missile launch to alert the likes of the President, the President’s cabinet, combatant commanders, the Missile Defense Agency, and troops in the field, said Col. Daniel T. Walter, senior materiel leader for the Space Sensing Directorate’s Strategic Missile Warning Acquisition Delta.

The SBIRS constellation serves as a successor to, and works in concert with, the Defense Support Program constellation, also orbiting in GEO, the officials said. SBIRS not only detects the fact of a missile launch, predicting points of origin and impact, but also identifies “a vast arsenal of missiles,” Walter said. Those include not only long-range intercontinental ballistic missiles, “but as we’re getting better at this mission area, we’re able to detect much shorter-burn missiles.”

SBIRS GEO-6 comes online as the Pentagon plans to field new missile-warning and missile-tracking constellations in GEO, polar, low Earth (LEO), and medium Earth orbits (MEO) starting in 2025. The new space architecture responds to the desires to track faster, maneuverable hypersonic missiles and to improve resiliency against anti-satellite weapons through sheer numbers and by placing the satellites in various orbits.

An experimental satellite preceded the sixth SBIRS to GEO in July. The Wide Field of View Testbed (WFOV) will provide data to inform the Space Force’s Next-Generation Overhead Persistent Infrared (Next-Gen OPIR) constellation. The WFOV satellite will monitor Earth’s atmosphere for infrared signatures at a higher resolution and over more of the Earth than SBIRS satellites.

Several months of on-orbit testing of SBIRS GEO-6 follow the launch in which “we go out and we test all the subcomponents of the satellite,” said Maj. Matthew Blystone, program manager overseeing production, launch, and early orbit testing of the SBIRS GEO 5 and 6 missions. “We deploy solar arrays and light shades, and then we start payload tuning.”

A period of operational acceptance follows during which the 2nd Space Warning Squadron of Space Delta 4 at Buckley Space Force Base, Colo., “will more or less kick the tires on the satellite, just to make sure that everything is good to go” before the delta officially takes command of the satellite, Blystone said.

Lockheed Martin built the satellite carrying its infrared-sensing payload made by Northrop Grumman. Its expected life is 12 years.

SBIRS GEO-6 is the third-to-last national security launch on a United Launch Alliance Atlas 5 rocket before transitioning to ULA’s new Vulcan Centaur. The Pentagon’s final two Atlas V launches will be in 2023. All five of the SBIRS GEO satellites already in orbit have launched on Atlas 5s as well.

Scientists from the Air Force Research Laboratory and outside organizations have sent a promising selection of spacecraft construction materials to the International Space Station, there to be exposed to space weather. MISSE-16 surpasses past MISSE missions by collecting data about the materials during the flight in addition to before and after.