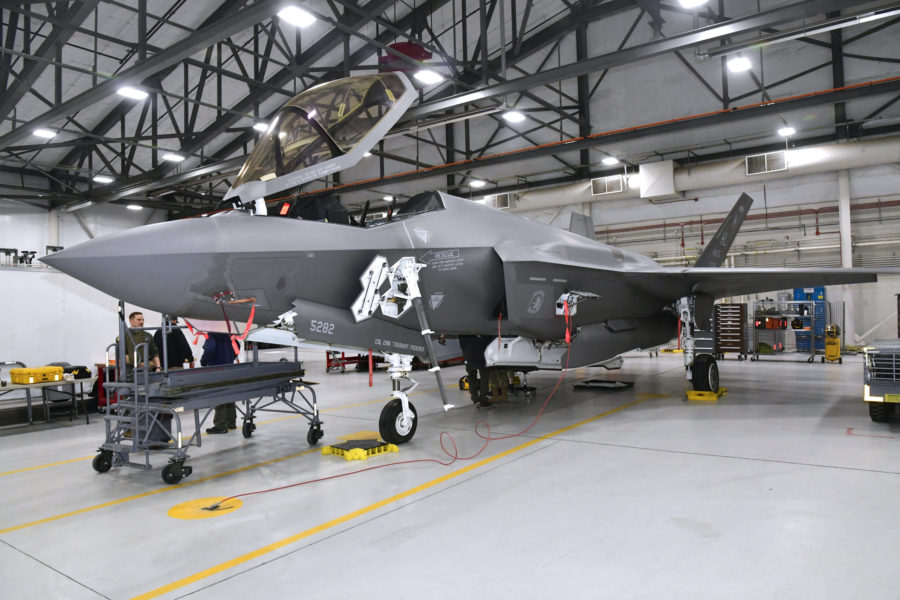 The Air Force is experimenting with a new pod expected to sharply improve fleet predictive maintenance and mission data and to accelerate software fixes across the entire Combat Air Forces. The pod miniaturizes and encapsulates a test rig previously too large and expensive for use in anything other than test aircraft.

Assuming funding is forthcoming, the Air Force plans to outfit half the CAF with the Quick Reaction Instrumentation Pod (QRIP) by the end of 2025, according to the 59th Test and Evaluation Squadron. Some 19 F-35s are now equipped with it, and USAF plans to put it on more F-35s and F-22s first, followed by aircraft from the fourth-generation fleet. The cost of the unit is orders of magnitude less than the previous, comparable test rig.

The QRIP collects both mission data from sensors and weapons, as well as vehicle performance data from engines, flight controls, etc., according to the 59th TES. The pods will also improve mission debriefs and help “find unknown issues, correct software deficiencies, improve mission data … in ways we’ve never been able to do before,” said Lt. Col. Nathan Malafa, 59th TES commander, in an email.

The pod, described as “football-sized,” fits inside the F-35 weapons bay, where it doesn’t interfere with any other function. Test units have been flying with USAF F-35s since March. The pod is made by Curtiss-Wright and is part of the company’s QRNexus family of data recording systems.

“Instrumentation packages like QRIP are traditionally reserved for integration on test aircraft, designed to collect data strictly for test and evaluation purposes,” according to a 59th TES press release. “These devices have historically been too large, cumbersome, and expensive to consider for operational aircraft integration, until now.” Those previous test rigs, weighing more than a ton and costing as much as $25 million apiece, dwarf the eight-pound QRIP, which costs around $230,000. The unit has a capacity of “almost a Terabyte of data,” the Air Force said.

The pod will allow USAF to make use of “crowd-sourced data” that can point toward problem-prone components and track break rates and failure reasons for various systems. That will improve the speed of maintenance and presumably lower its cost.

The data will be available to software developers “within minutes, versus the traditional weeks or months,” building better data sets “while improving mission data reprogramming, data products, and software development,” the 59th TES said.

The squadron was unable to disclose which units the QRIP pod is equipping right now, but they are “scattered around the Air Force” and have delivered data from aircraft operating on deployments outside the continental U.S., a 59th spokesperson said. The device has also been tested with Marine Corps and Navy F-35s, suggesting it will have application to the entire F-35 fleet, including international users.

“We’re also working plans for other platforms, but a concrete timeline has not been solidified yet,” she said.

“The more data we can collect from the Air Force’s diverse portfolio puts the ‘crowd’” in crowd-sourced data “and amplifies data sets we can use to gain competitive advantage against our adversaries and competitors,” said Malafa in the release.

“QRIP captures data that is currently not being recorded, or being discarded at the cutting room floor, and makes it available and accessible at the speed of relevance,” he said. “Big data analytics, machine learning, and artificial intelligence do the heavy lifting to sift through this data and highlight where action needs to be taken.” The data collected by the QRIPs has been demonstrated “to great effect by watching video from [outside CONUS] sorties minutes after the data is ingested, over 6,000 miles away,” said Malafa. “The implications of this are only limited by our imagination.”