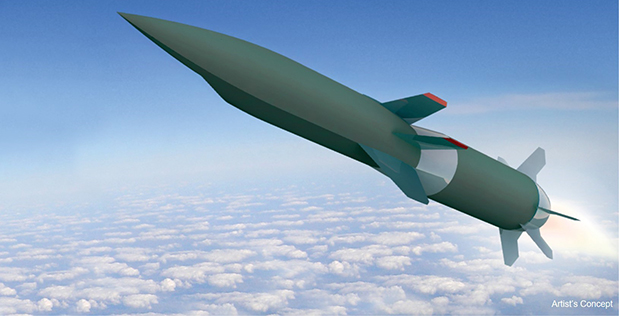 The flight test likely achieved about 327 seconds of hypersonic flight under scramjet power, versus 200 seconds achieved by the Boeing X-51 Waverider in 2010, based on figures provided by DARPA.

“DARPA, in partnership with the U.S. Air Force, recently completed a second successful test of a Hypersonic Air-breathing Concept, known as HAWC,” Stefanie Tompkins, head of DARPA, told the Senate Armed Services subcommittee on emerging threats and capabilities. “This test set a record for scramjet endurance, and we believe it’s an inflection point on the path to reclaiming U.S. leadership in hypersonic weapons.”

Tompkins did not provide details, but DARPA issued a release saying it had flown the Lockheed HAWC 300 miles at altitudes up to 65,000 feet. Scramjets require supersonic speeds to ignite, and are boosted to those speeds by a detachable rocket. Since hypersonic flight begins very quickly after the rocket fires, most of the 300 miles would be flown under scramjet power.

“We were at hypersonic speeds for the majority of that distance, and it would be a longer flight than X-51,” a DARPA spokesman said in response to that calculation.

Tompkins’ testimony remark also suggests the duration of flight by the Lockheed HAWC bested the performance of the competing Raytheon HAWC, which made a free flight in September 2021. Few details of that test were revealed, although it was touted as a success by DARPA.

Pentagon officials said the Lockheed HAWC test was not immediately made public to avoid escalation in the Ukraine war, in which Russia had just used a hypersonic missile to attack a weapons depot.

“This Lockheed Martin HAWC flight test successfully demonstrated a second design that will allow our warfighters to competitively select the right capabilities to dominate the battlefield,” said Andrew Knoedler, HAWC program manager in DARPA’s tactical technology office, in a DARPA press release. “These achievements increase the level of technical maturity for transitioning HAWC to a service program of record.”

In the September test, DARPA said the Raytheon missile “kicked on” just seconds after being released from its launch aircraft, then “compressed incoming air mixed with its hydrocarbon fuel and began igniting that fast-moving airflow mixture, propelling the cruiser at a speed greater than Mach 5,” DARPA said at the time.

DARPA said the Raytheon missile achieved all its primary goals for the test, including vehicle integration and release, safe separation from the launch aircraft, booster ignition, boost, booster separation, engine ignition, and cruise.”

In budget briefings last week, the Air Force signaled that it is emphasizing the HAWC over the boost-glide AGM-183A Air-Launched Rapid Response Weapon, or ARRW, as the ARRW has failed a number of attempts to make a successful free flight.

“It’s funded” in the fiscal 2023 budget, he said, and after further scrutiny, “we’ll make an assessment” about whether to continue the program.

The $577 million for hypersonics weapon research in the fiscal 2023 budget covers both ARRW and the Hypersonic Attack Cruise Missile, the latter of which will build on HAWC research. The budget request was to include $160 million to buy 12 ARRWs, but that money has been almost entirely shifted back to research, development, test, and evaluation, Peccia said.