Skip to content
Airmen with the 43d Fighter Generation Squadron prepare to launch F-22 Raptors at Eglin Air Force Base, Fla., Feb. 1, 2022. Each jet is assigned a crew chief who performs routine maintenance to include pre- and post-flight checks along with launching and recovering aircraft. Air Force photo by Airman 1st Class Tiffany Price.
Expand Photo 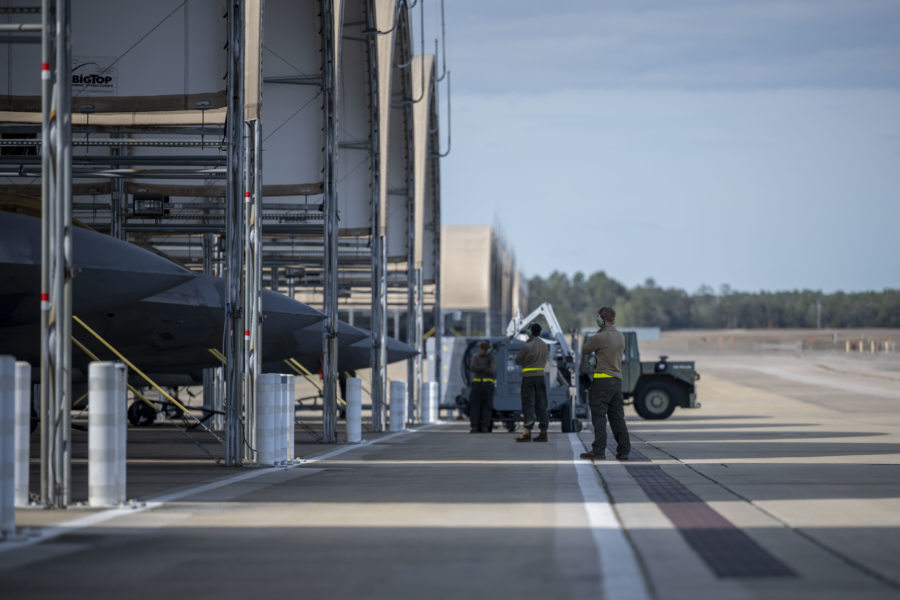 The Air Force will have an estimate of what it would cost to upgrade 33 Block 20 training F-22s to operational configuration by mid-September, and it will likely be “a tremendous number,” Brig. Gen. Dale White, program executive officer for fighters and advanced aircraft, told reporters at an industry conference.

“We’re working closely with Lockheed” Martin to deliver the new cost estimate, and it should be ready “in the next 30 days,” White said at the Life Cycle Industry Days conference in Dayton, Ohio, on Aug. 12.

In its fiscal 2023 budget request, the Air Force asked Congress to allow it to retire 33 Block 20 F-22s, which are used for training and aren’t up to the current 3.2B Block 30/35 operational configuration. The House, in its version of the defense bill, has instead directed the Air Force to upgrade the jets to operational configuration, in order to provide more combat capacity.

Air Force Secretary Frank Kendall told the Senate in May that such an upgrade would cost about $2 billion, or “about $50 million apiece.” However, White said that number was based on a 2019 estimate.

“We’re in the process of validating that, and seeing what’s changed, if anything,” White said. “We don’t have the data back.”

“We have looked at this over the years,” he added. “This is a very different time in terms of supply chain” and inflation.

White said he fears that Congress doesn’t appreciate that simply upgrading the jets wouldn’t be the whole story.

“When you say, ‘bring it up to a certain level,’ you’re talking about bringing it up to the level the Raptor’s at today,” he explained. “And that costs X amount of dollars. When you think about where the Raptor is going from here to the end of the decade, though, there is a lot of capability development there.”

He continued, “So now, not only do you have to bring it to where it is today, you also have to carry those 33 jets [forward] with the combat fleet” as well. “Now you have a capacity issue.”

This is “the one thing that does concern me,” he said. If the 33 Block 20s in question are to stay “with” the rest of the fleet, “I have 33 additional jets I have to do sensor enhancement on,” as well as new low-drag pylons and other new capabilities.

Air Combat Command recently released concept art of F-22s flying with stealthy fuel tanks and unexplained slender, stealthy-looking pods under the outer wings, which experts have speculated could be an electronic warfare or infrared search-and track systems, or possibly both.

One of White’s F-22 program staff also noted that the funds to operate the 33 jets was taken out of the budget and the savings applied elsewhere. If they are restored, “we have to put that O&M (operations and maintenance funding) back in, to keep those healthy” he said. Something else would have to be cut to do that.

Congress has asked the Air Force to provide an estimate of the cost to bring the 33 jets up to operational currency. The Senate, in its version of the defense bill, has enjoined the service from doing anything that would reduce F-22 capacity.

Air Combat Command has looked at increasing the number of all-up F-22s a number of times since 2010, but former ACC commander retired Gen. James “Mike” Holmes told Air Force Magazine in June 2020 that the expense consistently knocked it out of consideration when measured against other, higher-priority projects.

“Tradeoffs have to be made” about “the best place to spend your counterair dollar,” Holmes said at the time, and upgrading the older Raptors never quite made the cut.

Retired Lt. Gen. David A. Deptula, head of AFA’s Mitchell Institute for Aerospace Studies, said upgrading the training F-22s is “an affordable way” to add “another squadron of fifth-generation capability and capacity” to the Air Force’s dwindling fleet, which he said is planned to shrink by 1,000 aircraft over the next five years. Taking them out would reduce the deployable Raptor fleet to 100 aircraft, and of those, only a third would be “in the fight” at any given time, with another third in maintenance and another refueling and re-arming.