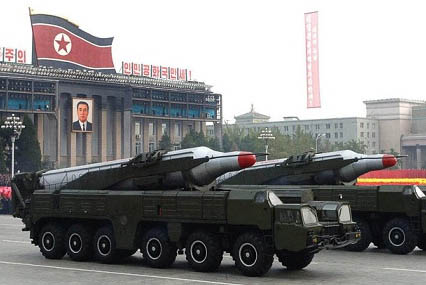 Assessments of six North Korean Hwaseong-13 mobile intercontinental ballistic missiles (SS-N-08 is its western designation) seen in parades in April 2012 and July 2013 were derided as fakes or mockups, but a new analysis by veteran North Korea analysts suggest otherwise. Jeffrey Lewis, director of the East Asia nonproliferation program at the James Martin Center for Nonproliferation Studies, and John Schilling, an aerospace engineer with more than 20 years of experience, writing at Johns Hopkins’ “38 North” website, posit most of the technical differences have disappeared from the props used in parades compared to debris recovered by South Korea after the DPRK’s December 2012 space launch. “North Korea appears to be moving to develop an intercontinental ballistic missile,” Lewis and Schilling declare in the report, which also notes the December launch was “about as technically challenging” as an ICBM launch. Lewis, speaking with the Daily Report, said it is very likely the DPRK is finalizing the missile design, rather than building fakes. “From a technical standpoint, I would expect a flight test at any time,” said Lewis. However, he noted any such test would be more of a “demonstration” than a rigorous experiment. The factor determining whether this will happen is political, not technical, he added.