Skip to content
A diagram illustrates the orbital altitudes of debris fragments created in Russia's destruction of the derelict Cosmos 1408 satellite in a weapon test. Graphic courtesy of LeoLabs.
Expand Photo 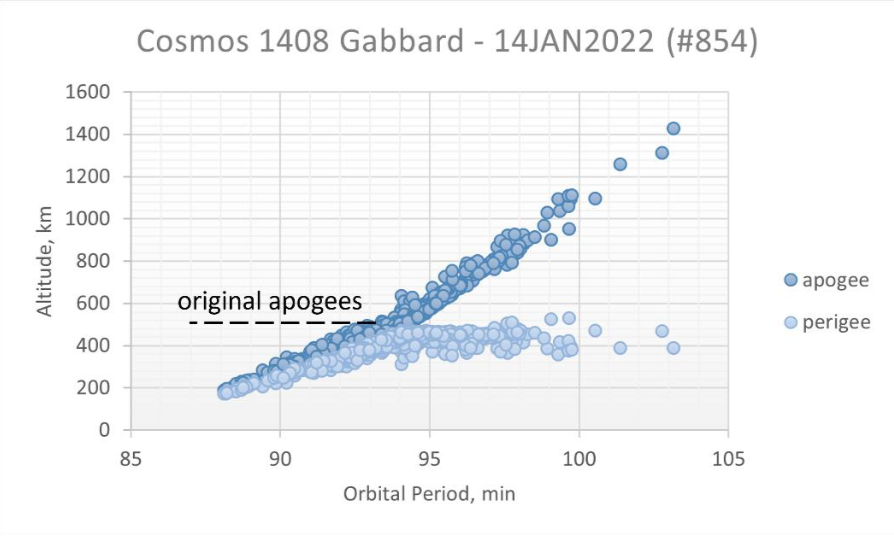 The Space Force won’t speculate publicly on details about Russia’s debris-generating test of an anti-satellite weapon in low Earth orbit in November. Outside experts, on the other hand, suspect that the weapon approached the target satellite from behind and below and broke it up into relatively fewer, but more massive, fragments for a satellite its size.

New fragments from the Russian ASAT test have already resulted in hundreds of close “conjunctions” with pre-existing objects, with varying probabilities of a collision, according to a new analysis provided to Air Force Magazine by the space tracking company LeoLabs. A conjunction is when satellites are estimated to pass closely by each other. The new debris has doubled the chance of a collision throughout much of low Earth orbit.

And while half of those conjunctions were with operational satellites, the other half—with derelict objects such as old rocket bodies—were of the type that could pose a greater hazard over time. Meanwhile, fragments too small to track could still cause enough damage to end a mission.

The Space Force’s Space Operations Command stuck with the government’s original estimate in reply to a request for an updated number of new fragments attributed to the destruction of the derelict Soviet satellite Cosmos 1408.

“Currently, the 18th Space Control Squadron continues to track the 1,500 pieces of debris associated with the breakup of [Cosmos 1408],” a spokesperson replied. “It will take months to fully analyze all the data provided by multiple sensors and confidently catalogue each object as originating from this intentional collision event.” The command didn’t provide estimates for how long the fragments are likely to stay in orbit.

Drawing on expertise in hypervelocity phenomenology, astrodynamics, and spacecraft design, however, Darren McKnight of LeoLabs has pieced together clues to the nature of the weapon and drawn conclusions about possible ramifications. LeoLabs tracks space objects with its own radars and matches its observations with the Space Force’s public catalog to predict satellite conjunctions so operators can maneuver their spacecraft out of the way. LeoLabs had cataloged 1,252 fragments of Cosmos 1408 as of Jan. 25.

McKnight said he’s “seen nothing to counter” LeoLabs’ initial analysis of “a likely non-hypervelocity impact,” meaning the warhead probably wasn’t traveling remarkably faster than the satellite it targeted. In that case, “it would be very difficult to have the geometry to be anything other than from behind (and of course from below),” McKnight said in an email.

“Complicated warhead design could possibly obfuscate the approach trajectory, but it is hard to understand why that would be useful,” said McKnight, a graduate of the Air Force Academy who also taught there.

A non-hypervelocity collision tends to create fewer, larger fragments and to transfer more momentum to the debris, according to one of LeoLabs’ earlier reports. The fragmenting of the 2,200 kg Cosmos 1408 into “only” about 1,500 pieces suggests that the “average fragment mass is greater than typical,” so the “debris on average may be longer-lived than typical for fragments at the same altitude.”

While the impact of the Russian ASAT test strewed some of the debris into orbits nearly 1,000 km higher than Cosmos 1408 was orbiting, most of the increased risk of a collision is in the range of 370 to 470 km in altitude. The International Space Station orbits at about 400 km, where the new debris has so far more than doubled the probability of a hit. That’s with debris fragments 10 cm and larger only partially cataloged and hundreds more fragments expected. Above 625 km, however, LeoLabs judges the increased risk of a collision as “very small.”

Operators of functioning satellites can mitigate the likelihood of a collision by maneuvering, so the close encounters with derelict objects could present the greater threat over time.

“The potential collisions with massive derelicts will generate yet more debris fragments, adding yet a greater statistical likelihood of catastrophic or mission-terminating impacts,” according to LeoLabs’ report.

LeoLabs logged 351 conjunctions over 30 days leading up to the latest analysis, and that was before many of the fragments had been cataloged.

As of mid-January, two months after the test, more than 75 of the fragments had already reentered Earth’s atmosphere, and the atmosphere was exerting noticeable drag on other fragments sent into lower orbits.

None of the predictions take into account the “likely much greater number” of fragments from the Russian ASAT test smaller than 10 centimeters that are “still capable of causing mission-terminating effects on operational satellites.”