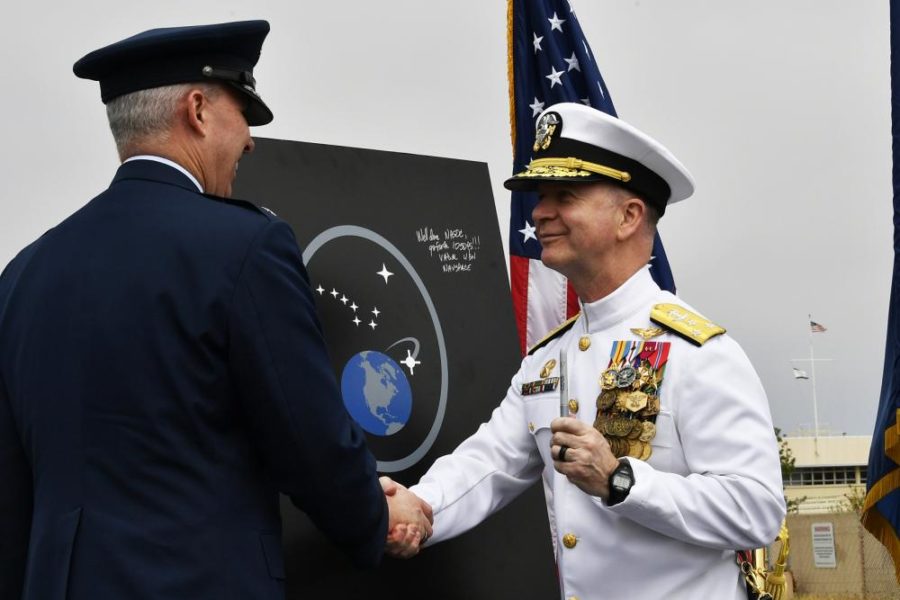 More than a dozen satellites and the Navy unit that operated them transferred into the Space Force on June 6, when the Naval Satellite Operations Center became the 10th Space Operations Squadron.

The switch marked the first of several space-focused units transferring from the Army and Navy over to the Space Force, a process that began as soon as the new service stood up in December 2019.

After months of discussion, the Space Force announced in September 2021 a list of 15 Army and Navy units that would transfer over, units that contained 319 military and 259 civilian personnel. Later that month, the Space Force announced it would welcome 215 military and 259 civilian personnel from those units.

Those transfers were supposed to start with the beginning of fiscal 2022, but Congress’ delay in passing a new budget slowed the process down. An appropriations bill was finally passed in March, setting the stage for the June 6 Disestablishment and Assumption of Command Ceremony at Point Mugu, Calif.

“This activation marks the beginning of the Department of Defense’s consolidation of all narrow-band, wide-band, and protected SATCOM to include all associated responsibilities for training, acquisition, and sustainment activities under a single military service for the first time in history,” Space Force Lt. Gen. Stephen N. Whiting, head of Space Operations Command, said in a release.

The Naval Satellite Operations Center, or NAVSOC, first stood up in 1962 and has operated the Navy’s satellites—there are 13 at the moment, providing global narrowband communications.

“For 60 years, NAVSOC has advocated and advanced American maritime superiority,” said Vice Adm. Ross A. Myers, commander of U.S. Fleet Cyber Command and the 10th Fleet, during the ceremony. “NAVSOC enabled satellite communications to afford the United States and her allies the crucial ability to provide defensive measures, conduct over-the-horizon monitoring and targeting, and project combat power in areas of conflict and instability around the globe.”

All 13 of those satellites are now under the Space Force, including the Ultra High Frequency Follow-On (UFO) satellite system, the Mobile User Objective System, and the Fleet Satellite Communications System. In addition to the satellites, NAVSOC also transferred over a facility at Laguna Peak, three miles from Point Mugu, that is responsible for the Space-Ground Link System and the satellites’ telemetry, tracking, and command operations.

“Space has become highly contested,” Col. Matthew Holston, commander of Space Delta 8, said at the transfer ceremony. “Our adversaries recognize our reliance on space, and they are actively seeking ways to create vulnerabilities to take away our competitive advantage. It is the 10th Space Force Operations Squadron that is on the front lines to guaranteeing our American way of life.”

According to a release, the 10th Space Operations Squadron was designated as such as a nod to its history as part of the 10th Fleet.

While NAVSOC is now part of the Space Force, the formal transfer of other units is still to come, including the Army’s 53rd Signal Battalion.

Editor’s Note: This story was updated June 15 to clarify which Army units will transfer into the Space Force.