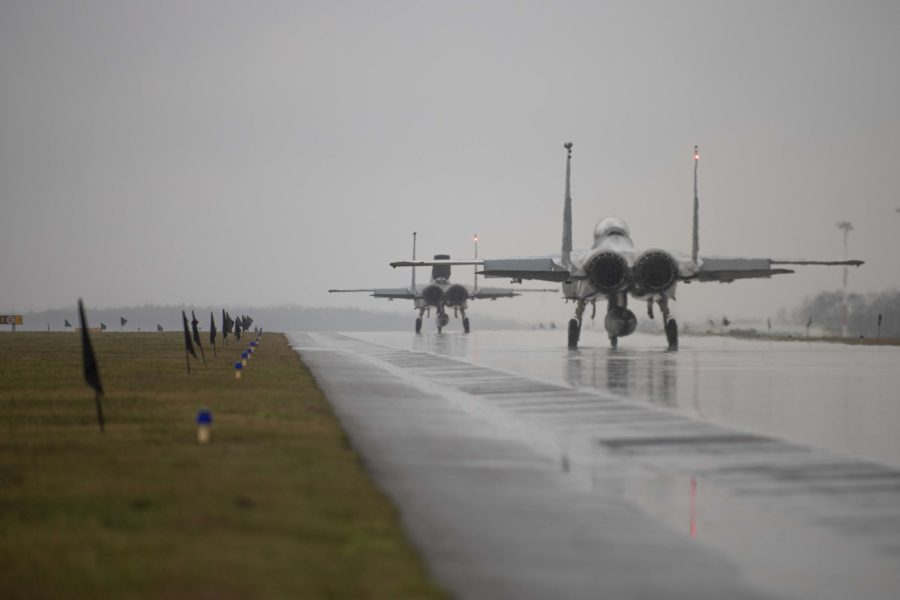 “It’s a rather frequent situation,” Nowak said. “Fighters are scrambled twice or three times from the [quick reaction alert] typically in 24 hours, so that’s a lot.”

“Whatever they have, they flew here,” he said. “There are a variety of threats.”

Nowak said Russia is also keeping its airborne early warning and control aircraft, the Beriev A-50, airborne at all times.

Russia’s mounting combat jet presence near Polish air space bordering the Baltics and Belarus in recent months was met early by U.S. deployments from RAF Lakenheath, U.K., and Spangdahlem Air Base, Germany, beginning the first week of February, prior to the Feb. 24 invasion. NATO partners Germany and the United Kingdom also joined the effort.

Even with the NATO plus-up on aircraft, Russia is testing the air space and the NATO response time.

Polish skies border the Russian exclave of Kaliningrad on the Baltic Sea to the north and Belarus to the east. Poland also has a border with Ukraine to its southeast, but Russian jets battling Ukraine have yet to venture so close to NATO airspace, choosing instead to fire cruise and hypersonic missiles from Russian territory at Ukrainian targets near the Polish border.

“We put a lot of effort currently into this air policing system,” Nowak said. “The problem for us is that, with relatively small airports like we have, and we have a small fighter fleet, its exhausting for us, so we cannot rotate like you can.”

Poland’s need is urgent, and it is rooted in what Poland perceives as a weak response by NATO to Russian President Vladimir Putin’s incursion in Ukraine in 2014.

“This time, there is a very sober awareness that our reaction must be very decisive,” he said.

In turn, Poland has taken on tremendous risk, hosting 10,500 allied troops in addition to 24/7 air patrol and surveillance.

“We have a very busy air domain recently,” Nowak said.

“We reacted as required, and we postured as required,” he added. “We showed the adversaries that we are ready, and we are not going to back off.”

U.S. and Poland both fly F-16s, and all Polish pilots flying American aircraft train in the United States. However, the quick response did not come without operational shortcomings.

“We have discovered some operational gaps due to the fact that we are quite a young NATO country,” Nowak said. “So, we catch up with the U.S. Air Force capabilities.”

U.S. Air Force fighters patrol Poland’s skies alongside the Polish Air Force, plugging into a complex network of American, Polish, and NATO systems under NATO Air Command that initially took a week to work through, Nowak admitted, before the air picture could be shared properly. The so-called Enhanced Air Policing missions have brought regular rotations of U.S. fighters from across Europe, including Air Force F-16s and F-35s, and Marine Corps F/A-18s.

Poland’s adoption of American techniques, tactics, and procedures along with joint training and education have made the deployments smooth.

“One day American Airmen [arrive] here, the next day they can generate operational sorties,” he said.

Russia has, in turn, used state-controlled media to build opposition to Poland and public support for an invasion of the Baltic States.

“Poland is perceived as a threat to Russia and also as a country which supports a strong U.S. presence here in Europe,” Nowak said. “For Poland, our special relationship with the U.S. Air Force is very important. It’s vital for us.”