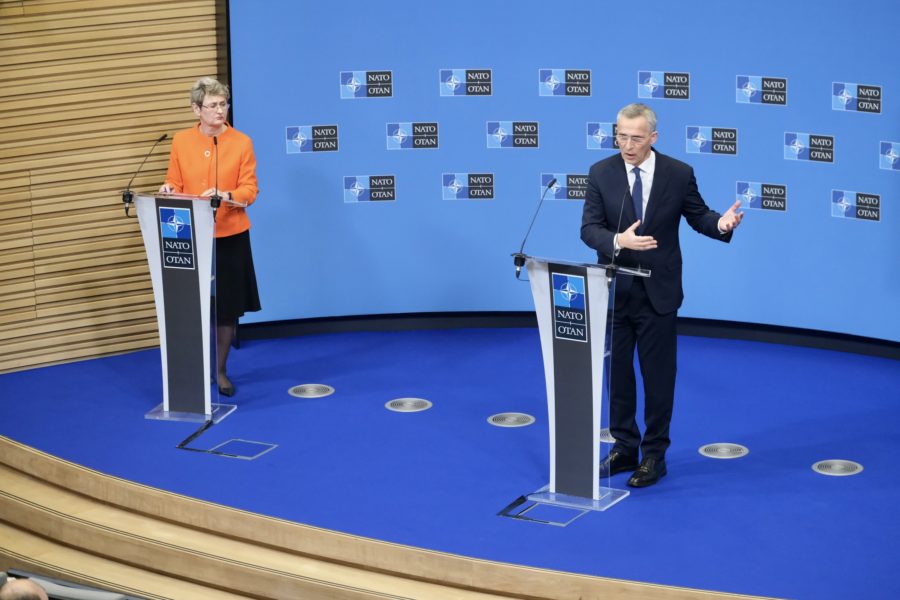 NATO activated a specialized defense element to protect against a potential mass-casualty chemical, biological, or nuclear weapon attack by Russia in Ukraine. The move came as alliance defense ministers met in Brussels on March 24, promising new types of assistance to Ukraine.

“We are taking measures both to support Ukraine and also to defend ourselves,” said NATO Secretary-General Jens Stoltenberg at the conclusion of the leaders summit and before the start of a G-7 meeting.

U.S. government officials have warned that Russia is threatening the use of non-conventional weapons on the battlefield in Ukraine, which Stoltenberg said could affect citizens within NATO’s borders.

“Any use of chemical weapons will totally change the nature of the conflict,” Stoltenberg said. “There’s also a risk that it will have a direct effect on people living in NATO countries, because we can see contamination, we can see the spread of chemical agents or biological weapons into our countries.”

“Allies are deploying additional chemical and biological and nuclear defenses to reinforce our existing and new battlegroups,” Stoltenberg said.

A NATO official told Air Force Magazine that activation of the CBRN units from the NATO Response Force involves a battalion-sized force, or about 400 Soldiers.

“They are not deploying right now, but will be put to higher alert,” the official said in a written statement.

In recent days, U.S. government officials have warned that Russia’s rhetoric heightens the real possibility that Russia would use chemical weapons to compensate for its intransigence on the battlefield.

On the South Lawn of the White House on March 23, President Joe Biden called the danger that Russia could employ chemical weapons “a real threat.”

In a brief to reporters ahead of the NATO meeting, a senior administration official explained that NATO has a Combined Joint CBRN Defence Task Force, which includes specially trained and equipped forces able to deal with the threats posed by chemical, biological, radioactive, and nuclear weapons in the event of attacks against NATO populations, territory, or forces.

In his March 24 briefing, Stoltenberg said the allies had agreed to deliver new CBRN capabilities and training to Ukraine that could include detection equipment, protection and medical support, and training in decontamination and crisis management.

Other measures were taken to strengthen NATO’s eastern flank.

Stoltenberg said the alliance voted to establish four new battle groups in Slovakia, Romania, Bulgaria, and Hungary. The four eastern flank battle groups will join four existing battle groups in the Baltic states and Poland as an enhancement to the NATO defense posture. It is unclear yet who will lead the new battle groups. The United States, Germany, Canada, and the United Kingdom already serve as NATO “framework nations,” contributing significant forces and leading the battle groups in Poland, Lithuania, Latvia, and Estonia, respectively, the Defense Department said in a March 24 statement.

Biden said in a statement that the creation of the new battle groups is “a strong signal that we will collectively defend and protect every inch of NATO territory. The President also said that between now and the June NATO summit in Madrid, plans will be developed for “additional forces and capabilities” to strengthen NATO defenses.

In his address to the alliance, Zelenskyy said resistance to impose a no-fly zone has led to 10 million people becoming migrants, including 3.5 million in NATO countries, as well as the destruction of cities and civilian deaths from air bombardment. Zelenskyy called for NATO to respond as a whole with “military assistance without restrictions.”

“Ukraine asked for your planes so that we do not lose so many people. And you have thousands of fighter jets. But we haven’t been given any yet,” he said, calling for NATO to donate 1 percent of its aircraft and tanks to Ukraine.

Zelenskyy also said that Russia had used phosphorus bombs that day, a possible start of chemical warfare. He warned that Putin intends to go beyond Russia, into the Baltic states and Poland. The Ukrainian President, dressed in a green army fleece, told alliance members they had yet to show “real actions.”

“NATO has yet to show what the alliance can do to save people. To show that this is truly the most powerful defense union in the world,” he said.