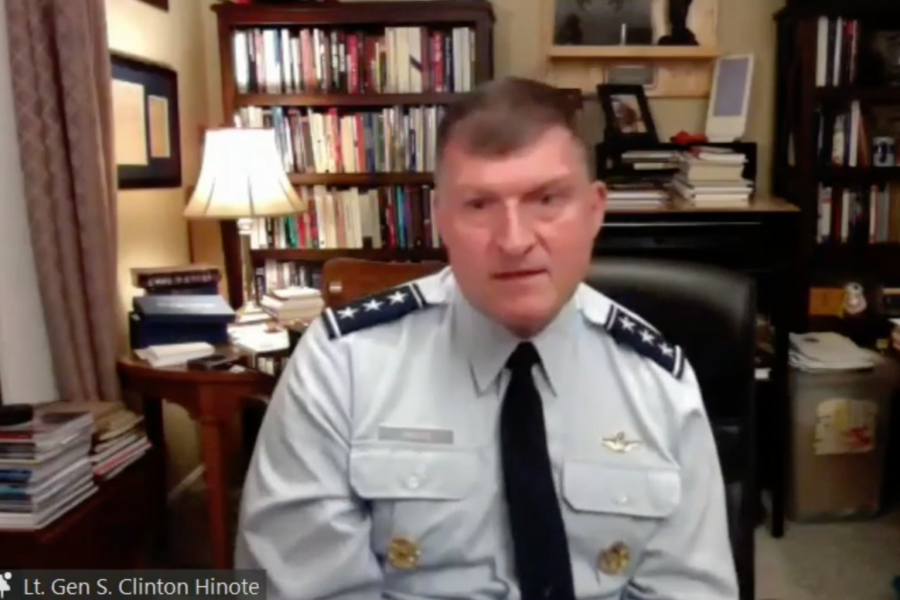 Russia’s failure to seize control of the skies during its invasion of Ukraine raises serious questions about the concept of air superiority—and how the U.S. might actually benefit from a contested domain in a future conflict, the Air Force’s top planner suggested Sept. 6.

Lt. Gen. S. Clinton Hinote, deputy chief of staff for strategy, integration, and requirements, detailed those questions as part of a virtual fireside chat with the Atlantic Council on the future of air warfare in light of the Russia-Ukraine war, which has lasted more than six months now.

In those six months, the airspace above Ukraine has been contested, as Russia’s more technologically advanced air force has been largely stymied by cheap, effective Ukrainian air defense systems.

Those results have led Hinote to conclude that “the barriers to entry for denial, for denying the use of airspace, are much, much lower these days than the barrier to entry for extending control and keeping control of the airspace,” he said.

Controlling airspace, or air superiority, has long been a central tenet of U.S. Air Force strategy. But given that the costs of achieving and maintaining that superiority have grown relative to what it takes to deny it for others, a “very interesting question” occurs, Hinote said.

“The question in my mind is, is there a chance, is there a situation in modern conflict, where mutual denial of a space is good for someone, operationally and strategically?” he said.

Given that the U.S. is interested in seeing the status quo preserved—China not invading Taiwan and Russia not invading a NATO ally—Hinote suggested that the low likelihood of any one nation achieving air superiority in a conflict might be a deterrent.

“Our potential adversary, China, has written deeply about what it believes are the prerequisites for victory, for success in military operations,” Hinote said. “They believe that you need to be able to establish air superiority, maritime superiority, and information superiority. … So, if we could prove that we can mutually deny air, maritime, and information, the logical conclusion is that our potential adversary never gets to the point where they’re ready to go, where they’re ready to start something we don’t want to see started. If that’s true, then I think this idea of mutual denial, especially in those three spaces, is key.”

And if the mutual denial of air superiority is an advantage for the U.S., “then we need to have a military that can achieve mutual denial, even at the edges of the battlespace, even on the doorstep of our adversaries,” Hinote added. “And clearly, that’s what we’re seeing when we see a place like Ukraine.”

While Ukraine is still seeking “fast and versatile” platforms such as the F-16 to challenge Russian positions in Ukrainian territory, the defenders have used weapons such as the Stinger short-range air defense system and the S-300 missile defense system to keep Russia’s air force largely “absent” from the conflict, in the words of Air Force Secretary Frank Kendall.

The success of those weapons, Hinote noted, raises other questions about how to “project power into the air and affect it there.”

“It’s not going to matter what domain that projection comes from. And increasingly you’re going to not worry about it. Increasingly, you don’t mind if the effect of mutual denial comes from the land. Clearly that is happening today,” Hinote said.

Moving away from such a concern is part of a broader shift that Hinote—among many in the Pentagon—is pursuing as part of the joint all-domain operations concept.

“As somebody who is thinking about joint all-domain command and control and is thinking about how we get from our current doctrine, which was really very centered on domains, to a doctrine that feels very fluid in domains, I see a lot of challenge there,” Hinote said. “I also see a tremendous benefit if we can do it.”

As it specifically relates to air power, though, Hinote said he would welcome discussion with the Army and other services about the roles and responsibilities of each service. In the meantime, the Air Force is looking to change the “cost-benefit analysis” of air superiority.

“We want to get to the point where shooting a missile at something is more expensive than taking the missile shot. That’s the radical difference right there. Because typically, we have been thinking about using air power in ways that involve very exquisite platforms and capabilities, that are very expensive,” Hinote said. “And a missile, or sets of missiles, or even a dozen missiles coming at it are much cheaper than that one particular platform. We’re trying to turn that around, and we think we can, and when that happens, it has the potential to change the entire return on investment for both our adversary and for us.”