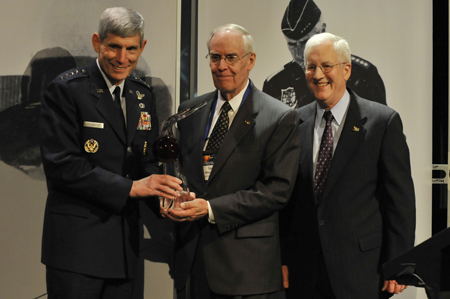 of Staff Gen. Norton Schwartz presented retired Gen. Thomas Moorman with the Gen. James E. Hill Lifetime Space Achievement Award. Moorman received the award, the Space Foundation’s highest honor, during the organization’s 28th National Space Symposium in Colorado Springs, Colo., on April 18. The foundation honored him for his contributions to national security space over his 35-year Air Force career and subsequent roles in industry after his retirement as vice chief of staff in August 1997. “Moorman is a space visionary. He has been absolutely essential in moving the ball forward in national security space, and for that we thank him,” said retired Gen. Howell Estes, a former head of US Space Command. (Colorado Springs report by Auburn Davis)