Skip to content
Under Secretary of the Air Force Gina Ortiz Jones briefs the media during the Department of the Air Force's rollout of its 2023 budget request on March 28, 2022. Screenshot photo.
Expand Photo 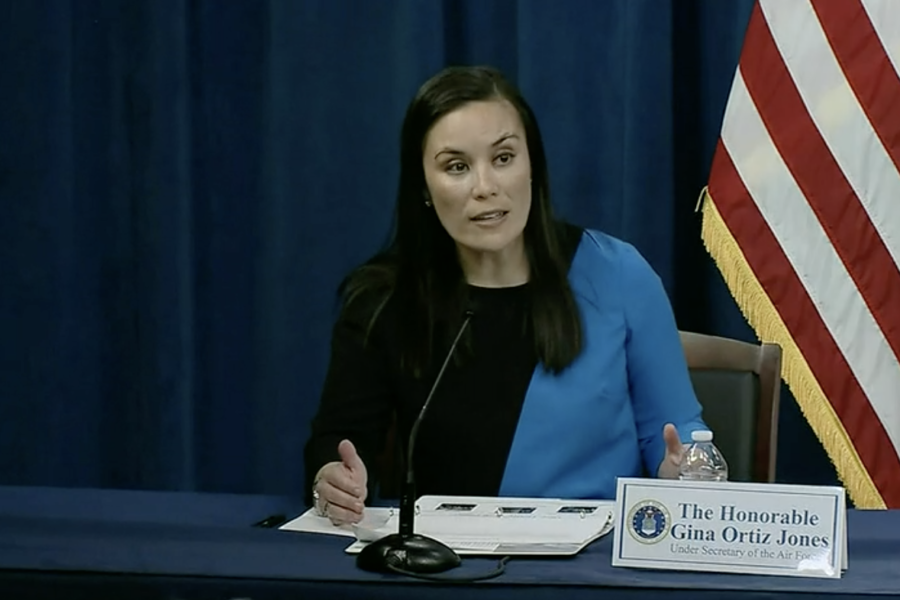 The Space Force could be in for a big budget boost in fiscal 2023 if the Biden administration’s request for a 36 percent bump has anything to do with it.

The Space Force’s $24.5 billion budget request for 2023 is a $6.5 billion increase over the $18 billion enacted by Congress for fiscal 2022. Accounting, in part, for the increase, the Space Development Agency’s budget becomes part of the Space Force’s for the first time in 2023. A greater emphasis on missile tracking and more interservice troop transfers also factor in.

The additional money will help to achieve Air Force Secretary Frank Kendall’s No. 1 “operational imperative” for the department of establishing a “resilient and effective space order of battle and architectures.”

The budget request is “a critical first step to combat emerging space threats” and to transition military space activities “from combat support to warfighting,” according to the Department of the Air Force’s overview of its budget request. The amount generally covers weapons and sustainment, education, training, support of the Space Force’s field commands, and carrying out missions, headquarters operations, and the duties of centers for doctrine, intelligence, and professional military education.

While the Space Force’s “indispensable support … underpins all other joint operations,” that support is “insufficient against the pacing challenge,” which is China, said Undersecretary of the Air Force Gina Ortiz Jones during a Pentagon briefing on the Department of the Air Force’s budget request March 28.

Within the Space Force’s $24.5 billion request, it would get $4 billion for operations and maintenance, including 200 more uniformed Guardians to bring the service’s total to 8,600. The O&M budget also includes the Defense Department’s proposed 4.6 percent pay raises for both military and civilian personnel; and 4.2 percent and 3.4 percent higher allowances for housing and subsistence, respectively. It adds $205 million above fiscal 2022 to fund weapons system sustainment at 83 percent of the requirement, an increase of 4 percent; plus $67 million to elevate six of the service’s space deltas—roughly equivalent to Air Force wings—to be fully mission capable.

The Space Force’s proposed $3.6 billion procurement budget includes three National Security Space Launches plus a launch for the Space Development Agency along with “investments in two follow-on” Global Positioning System satellites, “which will provide new capabilities including a spot beam that provides a 100x anti-jam improvement over current encrypted military code,” according to the overview.

A bigger percentage of the Space Force’s budget would go to research, development, testing, and evaluation than any other service’s at about 65 percent, or $15.8 billion of the Space Force’s request, an increase of $4.5 billion over the fiscal 2022 request. The amount is “to protect and defend current space assets, build more resilient and defendable architectures, and develop offensive capabilities to challenge adversary space capabilities,” according to the overview.

Jones said during an earlier briefing with members of the press March 25 that space domain awareness, along with missile warning and tracking, contribute to the DOD’s broader goal of “integrated deterrence.”

The new budget request asks for $1.03 billion for a “Resilient Missile Warning/Missile Tracking” program. Air Force Maj. Gen. James D. Peccia III, the deputy assistant secretary for budget, would only say March 28 that the “initiative is looking at all orbits.”

The Space Development Agency’s National Defense Space Architecture being designed for low Earth orbit accounts for another $987 million for missile warning and tracking in the Space Force’s RDT&E budget along with $461 million for its data transport satellites. Congress added $550 million on top of the SDA’s fiscal 2022 budget request of $936.7 million to speed up its missile tracking layer. SDA officials told reporters March 15 that they estimated SDA’s first batch of 28 infrared missile-tracking satellites would total $2.5 billion and that the satellites could be in orbit by 2025.