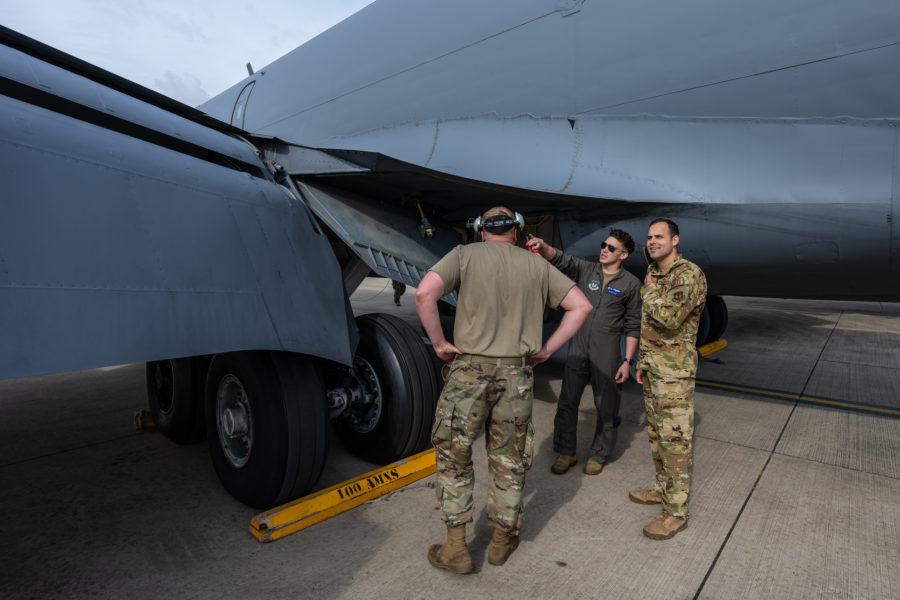 Mildenhall KC-135 Crews’ Unique Rapport: ‘I Don’t Know That I Could Choose Another Airplane’

RAF MILDENHALL, U.K—The ops tempo has increased as of late, but after every sortie, the pilots, co-pilots, and boom operators flying the KC-135s of the 100th Air Refueling Wing still gather for a debrief.

And in those sessions, the Airmen develop a bond they feel is special to those who fly on the Stratotanker.

“There is a potentially 18-, 19-year-old enlisted dude, and two majors or a lieutenant colonel and a major, or a captain or whatever,” Tech. Sgt. Blake Soule, a KC-135 boom operator, told Air Force Magazine. “And they sit together, and the boom can say to the pilots, ‘Hey sir, I need more out of you here. You didn’t do this very well,’ and vice versa. And that is such an important piece of building that rapport … and it’s really unique. A lot of other airframes that have a crew, the enlisted and the officers don’t really mix too much. They don’t operate the entire sortie in that way. So yeah, it’s a very beneficial way to work and to build that trust with your other crew members.”

Even on other tankers, the relationship between the pilots and the crew in the back can be different, said Capt. Jori Ingersoll, a KC-135 pilot.

“As far as the relationship, it’s all based on trust,” Ingersoll said, the three-person crew trusting the boom operator with “connecting multi-million dollar aircraft with multi-millions of dollars of fuel between the two of them.”

The KC-10 Extender typically has a crew of four, with a flight engineer. The new KC-46 Pegasus has two pilots and a boom operator, with room for up to 12 more crew members. But with the KC-135, the boom operator’s job can extend far beyond the act of refueling.

“They get to decide how involved they are in an airplane. And especially at Mildenhall, it’s a great involvement,” Ingersoll said. “When we do pattern work, the boom operator is the God’s eye view in the back. They can see everything outside, all of our instruments, the way the pilots are reacting. They cross check, so they double check us on airspeed, altitude, back us up on the radios. They’re, I mean, essentially another copilot in the back.”

Soule credited that “camaraderie” at Mildenhall in part to the 100th ARW’s relatively small, tight-knit group of pilots and boom operators. With 15 KC-135s, the wing is less than a quarter the size of the Air Force’s “super” tanker wing, the 92nd Air Refueling Wing at Fairchild Air Force Base, Wash.

That, combined with the 100th ARW being the only permanently based USAF tanker wing in Europe and Africa, means the Airmen at Mildenhall get plenty of experience with real-world missions.

“A lot of the boom operators have more time in the flare than a lot of the pilots have in the airplane,” Ingersoll said. “So the amount of experience that they have and the amount of diverse mission sets that they see is oftentimes well above what a pilot sees with the experience. So there’s a lot of respect that goes to that. I don’t know that I could choose another airplane because of what a cool relationship the three of you have to have.”

That sense of community is also boosted by some of the KC-135’s more unique aspects, Soule said. The aircraft has been flying for more than 60 years, and while that has made it a target for divestment in recent Air Force budgets, it also gives the crews who fly it satisfaction in keeping it going.

“I kind of take a little bit of pride in knowing how the airplane works, hydraulic cables and pulleys,” Soule said. “It’s not electric fly-by-wire. It’s not through a TV screen. It’s just a window and my eyeballs and some hydraulic fluid and a joystick. And I think that helps within the community build rapport among the crews and pride in what we do, is loving your airplane.”

There are still challenges in keeping the jets flight-ready, though, and Ingersoll credited Mildenhall’s maintainers for allowing the crews to maintain their high ops tempo.

“You’re dealing with older equipment, so you’ve got to be nice to it,” Ingersoll said. “And our maintenance teams … we couldn’t get off the ground without them … There will be times when we’ll have a piece of equipment break, and they’re the first to respond. They determine the timeline of us being able to get off the ground. It’s harder to troubleshoot these airplanes, because other airplanes will have a computer that will go ‘[bing], that’s the problem.’ And this airplane, [you’ve got] cables and cords. You really have to have a mechanical, intellectual brain to figure out what’s going wrong and how to fix it.”

So as more and more units transition over to the KC-46, Mildenhall is ready to stick with the KC-135 as needed.