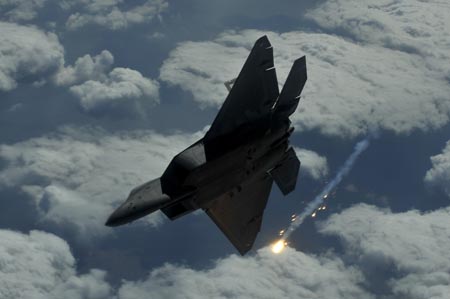 gh analysis done to justify Defense Secretary Robert Gates’ decision to truncate the F-22 buy at 187 airframes. That was the consistent comment from speakers at a Center for Strategic and International Studies program on tactical aviation issues Thursday in Washington. “There was no analysis,” underlying Gates’ choices, said retired Gen. Gregory Martin, adding, “It was driven by a budget drill.” Retired Adm. John Nathman, retired Vice Chief of naval Operations, said the F-22 cut—as well as other choices Gates made about new ships, fighting vehicles, and aircraft—showed no analysis of the effect such decisions would have on the industrial base. He said that without some new program in strike fighters, “we are about to lose … capacity in [aircraft] design.” Nathman asserted that the lack of “a strategic model” was “one of the key gaps” in justifying the decisions. Nathman and Martin said a national debate is needed on assessing the need for the F-22—and Nathman emphasized that Gates’ decisions are a starting point for that debate, not the end. Rebecca Grant of the Mitchell Institute for Airpower Studies said that 187 was certainly a “made up number” as it did not originate from any Air Force study. She declared, “I would characterize it as a high-risk number.” (For more, read Run the Numbers and items below)