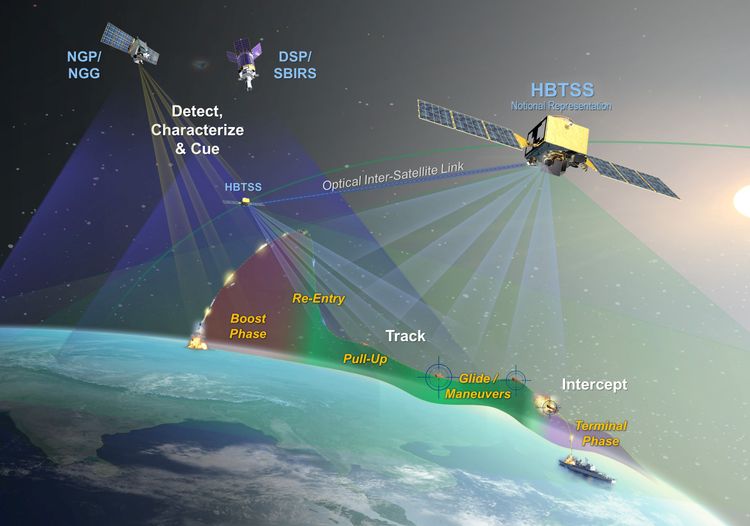 MDA Hopes to Add Its Own Satellites to Missile Tracking Architecture

As the Space Development Agency moves forward with plans for missile tracking and warning satellites, the Missile Defense Agency hopes to add its own satellites to that architecture, the agency’s director told a congressional panel May 11.

Vice Adm. Jon A. Hill’s comments to the House Armed Services strategic forces subcommittee came as the Pentagon has placed increasing emphasis on missile tracking and warning from space in response to China and Russia’s rapid development of hypersonic weapons.

Specifically, MDA is developing the Hypersonic and Ballistic Tracking Space Sensor, a program intended to work with SDA’s satellites to track hypersonic and ballistic missiles

“The first is to pick up the dim targets that cannot be seen by the current architecture today. So, from a ballistic perspective, we’re seeing changes there that make that fight much more challenging,” Hill said. “But when you get to the advanced hypersonic threat, which has a global maneuver capability, we need the ability to see it from space—so global coverage and that very close proximity from space to track those sensors.”

Two prototypes of the HBTSS are scheduled to launch in March 2023, Hill added, and will be placed in orbit so that they can “monitor tests” in the Indo-Pacific region, though he didn’t specify what tests.

“We’ll collect that data as a way to proof out that concept. We did a lot of work on the ground to show that we can extract those hot targets over a warm Earth. Now it’s about getting it into space and pulling that data down,” Hill said.

MDA’s plans for missile tracking are progressing alongside SDA’s work to develop and deploy a “Tracking Layer” as part of its large planned multi-use satellite constellation. SDA has already awarded contracts for the initial batch of satellites, called “Tranche 0,” and the layer could go live in low-Earth orbit as soon as 2025.

Both the Tracking Layer and the HBTSS are intended for low Earth orbit. And as SDA is scheduled to transition into the Space Force in October 2022, the three organizations are working together to advance the larger missile tracking mission.

“We’re staying very close to the Space Force as we make decisions on the overall architecture, and our vision is that the HBTSS will be a part of the overall constellation for dealing with that global maneuvering threat,” Hill said.

Meanwhile, U.S. Space Command is eager for all these systems to come onboard, its deputy commander, Lt. Gen. John E. Shaw, told Congress.

“We’re interested in any capabilities that are going to help us with any of these threats,” said Shaw. “And as MDA has pursued this particular program, HBTSS, the advantage of this is that we have a perspective from space that is invaluable and will allow us to get after a lot of these threats.”