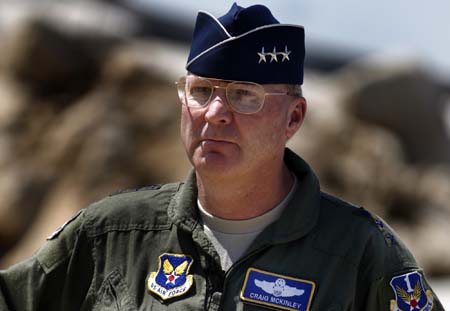 y promoted Gen. Craig R. McKinley is the first four-star general to head the National Guard Bureau and the first Air Force officer to lead the National Guard since 2002. Defense Secretary Robert Gates pinned on McKinley’s fourth star during a Pentagon ceremony late yesterday afternoon. McKinley, who has served as director of the Air National Guard since 2006, replaces Army Lt. Gen. Steven Blum as NGB chief. Blum has been named to be the first Guard deputy commander of US Northern Command. Both actions were part of an ongoing legislative push by the National Guard Caucus to elevate the status of the Guard in light of its increasing role in today’s Total Force, both in operations abroad and at home. At the ceremony, Gates said, “This elevation of the chief of the National Guard Bureau to four stars underscores the critical importance of the Guard to America’s overall national defense.” He also noted the change signifies the “vital role” the NGB chief has in “bridging the state and federal components … and the active and reserve components of our military.” (Includes Pentagon release)