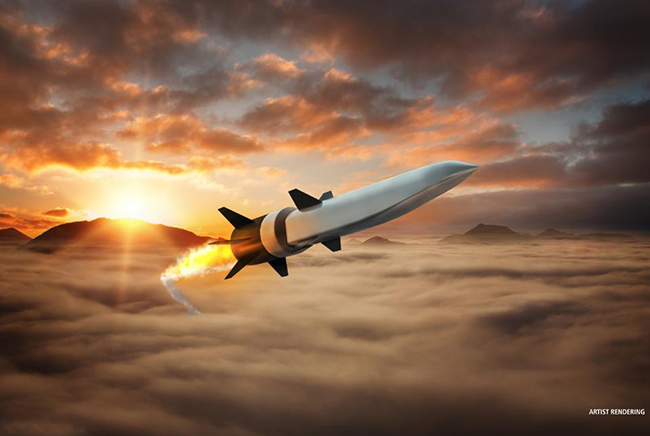 ‘Mayhem’ Will Be Larger, Multi-Role Air-Breathing Hypersonic System for USAF

The Air Force is seeking a new, air-breathing hypersonic system, nicknamed “Mayhem,” that would be larger than the AGM-183A Air-launched Rapid Response Weapon, and carry multiple payloads, perhaps performing an intelligence, surveillance, and reconnaissance mission in addition to attack.

USAF intends to solicit concepts for a new hypersonic system exclusively from hypersonics-knowledgeable contractors, namely Boeing, Lockheed Martin’s Skunkworks, and Raytheon, with contracts to be awarded in the first quarter of fiscal 2021, according to an Aug. 5 notice. Any companies that feel they are capable of doing the work and that they’ve been unfairly excluded need to contact the Air Force Research Laboratory within two weeks of the solicitation.

The system is officially called the Expendable Hypersonic Air-Breathing Multi-Mission Demonstrator Program, but USAF refers to it as “Mayhem,” or “Mayhem System Demonstrator” for short.

The new missile would be an air-breathing system—unlike the boost-glide ARRW—but would still use a solid rocket booster to accelerate to hypersonic speed.  The Air Force wants to get to preliminary design review within 15 months, suggesting it already knows the capabilities offered by the three companies and believes the technology is already largely mature.

The Air Force said the technology will build on efforts in the Hypersonic Air-breathing Weapon Concept, or HAWC, a joint program with the Defense Advanced Research Projects Agency, DARPA, as well as the High-Speed Strike Weapon (HSSW) program. In April, USAF solicited industry for a “solid rocket-boosted, air-breathing, hypersonic conventional cruise missile” that could be launched from existing fighters and bombers. It’s likely Mayhem is the same project.

Air Force acquisition executive Will Roper said April 29 the new missile would be pursued with rapid prototyping, as the ARRW and Hypersonic Conventional Strike Weapon, or HCSW, were. The Air Force dropped HCSW from its hypersonic plans in January, opting to devote its efforts to ARRW. Roper said at the time that he was impressed with the level of maturity of scramjet designs and he had previously expected them to come later than boost-glide. “I’m delighted to say that I was wrong,” Roper said. “Scramjet is much more mature and ready to go than I originally thought.”

Though apparently larger than the ARRW, the Mayhem still has to be small enough to be carried by a fighter aircraft, according to the solicitation. In recent discussion of the F-15EX, the Air Force and Boeing have said a large payload of 7,000 pounds or so could be mounted on the jet’s centerline station.

According to the solicitation, the Air Force wants a “larger-scale expendable air-breathing hypersonic” system, “capable of carrying larger payloads over distances further than current hypersonic capabilities allow.” The missile is to be capable of carrying “at least three distinct payloads” in a “payload bay” for “government-defined mission sets,” and these payloads are to be modular. Given that USAF didn’t use the word “warheads,” the other payloads are likely to be some kind of sensor or communications systems. The whole system is supposed to be expendable.

The Air Force Research Laboratory has “previously accomplished similar research under multiple efforts, including the Enhanced Operational Scramjet Technology effort,” the solicitation said. The engine will be a scramjet, or supersonic-combustion ramjet.

The Air Force may award two novel “multiple-award (indefinite delivery, indefinite quantity) contracts…split into two groups, each encompassing one propulsion system development and vehicle development and integration.” Each group of contractors would get a “single cost ceiling” with multiple contracts “scoped to each of two focus areas.” These are:

Later awards would be for fabrication, flight test, and vehicle modification for payload integration.

“Conceptually, two different air vehicle and two different propulsion contactors could be awarded” one of the IDIQ contracts, USAF said, but a single contractor could get an award for both focus area contracts. Teaming arrangements would be necessary and a similar agreement “amongst all contractors is being considered.”