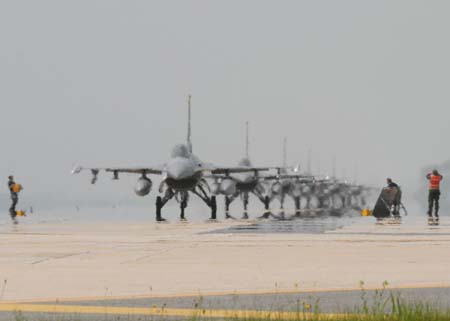 heightened tension on the Korean peninsula, Max Thunder, the USAF-South Korean air force joint exercise, aims to forge interoperability, while rehearsing rapid forward deployment of large-sized forces during a conflict. During the Red Flag-style exercise, which runs through Friday, nearly 50 combat aircraft, including South Korean F-4Es, F-15Ks, and KF-16s as well as USAF F-16s from the 80th Fighter Squadron at Kunsan Air Base, will converge on South Korea’s southernmost operating location, Kwangju Air Base. The week-long exercise is testing the ability of these assets “to deploy to and operate from a bare-base location,” explained Lt. Col. James Wilkerson, 80th FS commander. It is also gauging Kwangju’s ability to accommodate follow-on elements from four South Korean fighter wings and USAF units from Kunsan, Osan Air Base, and Eielson AFB, Alaska. (Kunsan report by MSgt. Claudette Hutchinson)