Looking for a New Air Force One 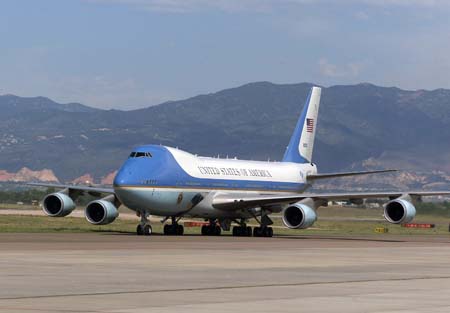 Air Force has launched an effort to find the next fixed-wing aircraft to serve as primary Presidential transport, replacing the Boeing VC-25s that have flown US Presidents since 1990. The VC-25, based on Boeing’s 747-200, is approaching the end of its 30-year design life, and, with commercial versions leaving airline service, the cost for parts and maintenance has increased. According to a Jan. 7 sources sought announcement, the Air Force conducted an analysis of alternatives, vying the cost of maintaining the current aircraft against buying a new one, and found that “replacing the VC-25 was the most cost-effective option.” The new Air Force One, like its predecessor, will be a highly modified commercial wide-body aircraft that USAF expects to see delivered—complete with communications, interior, and aerial refueling capability modifications—in Fiscal 2017, followed by a second and third aircraft in two year increments. The Wright-Patterson AFB, Ohio-based Aeronautical Systems Center, which is managing the Presidential Aircraft Recapitalization program, expects industry responses to its contractor capability survey by Jan. 28.