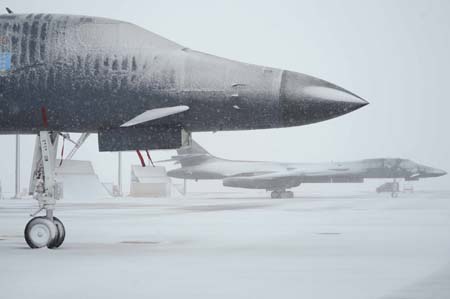 While the Pentagon vacillates on acquiring a new bomber, Rep. Madeleine Bordallo (D-Guam) and Rep. John Fleming (R-La.) are trying to focus attention on the issue by establishing a new bipartisan Congressional Caucus on the Long Range Strike Bomber. The new group will be “dedicated to maintaining and strengthening” the bomber force and “educating other members” on the need for a new generation of bombers “as an intrinsic part of the national defense apparatus,” they wrote in an Oct. 26 letter registering the caucus. Guam hosts Andersen Air Force Base, a major bomber hub in the Pacific. And Fleming’s district in Louisiana includes Barksdale Air Force Base, home to a B-52 wing and 8th Air Force, which oversees the nuclear-capable bomber force. Bordallo and Fleming are now beginning to reach out to other House members to join the group, Fleming spokesperson Amy Jones told the Daily Report Tuesday.